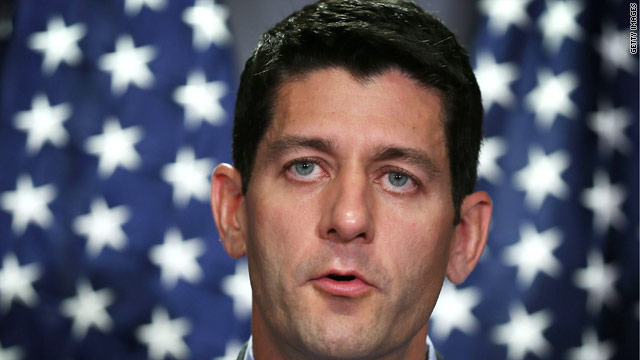 Washington (CNN) - As it urged presumptive Republican nominee Mitt Romney to be bold in his choice for a running mate, the editorial page of the Wall Street Journal – a major conservative voice - pushed him to choose House Budget Chairman Paul Ryan.

Ryan, a seven-term House member from Wisconsin, has won praise from many on the right for his budget plan which calls for major reform of Medicare, and emphasizes the need to cut the federal deficit and proposes major tax reform.

Saying it has nothing against the other possible contenders for the number two spot on the ticket - such as former Minnesota Gov. Tim Pawlenty or Ohio Sen. Rob Portman - the Journal on Thursday called Ryan part of a "new generation of reformers" and said "against the advice of every Beltway bedwetter, he has put entitlement reform at the center of the public agenda – before it becomes a crisis that requires savage cuts."

While Democrats have criticized him for being reckless and risking the future of Medicare, the Journal praised Ryan for possessing "a larger vision that stresses tax reform for faster growth, spending restraint to prevent a Greek-like budget fate, and a Jack Kemp-like belief in opportunity for all."

Paul Ryan is planning to go to Colorado on Saturday for his family's annual camping trip, his office told CNN.

He is in northern Wisconsin Thursday campaigning for Rep. Sean Duffy. As he told reporters earlier this week, he will spend Friday in his hometown of Janesville preparing for the camping trip.

Both the Weekly Standard and National Review's Rich Lowry have in recent days urged Romney to tap Ryan, a 42-year-old who has an appealing life story of overcoming adversity after his dad died, going on to college and rising through the political ranks. Proponents argue he would provide a youthful addition to the Republican ticket, and is now well-practiced on the television circuit defending controversial positions.

Some political analysts have said choosing Ryan would harm Romney because it would put budget plan pushed by House Republicans front and center in the campaign.

The Journal argued a Ryan choice would help the Republicans because they need to be bold.

"The larger strategic point is that Mr. Romney's best chance for victory is to make this a big election over big issues," the Journal wrote. "Mr. Obama and the Democrats want to make this a small election over small things – Mitt's taxes, his wealth, Bain Capital. As the last two months have shown, Mr. Romney will lose that kind of election. To win, Mr. Romney and the Republicans have to rise above those smaller issues and cast the choice as one about the overall direction and future of the country."

While Ryan decided not to run for the Republican nomination this time, he refused in an interview with CNN Chief Political Analyst Gloria Borger last year to say he would not accept if asked to join the ticket.

He has refused recently to discuss the possibility of his being tapped, but told the Milwaukee Journal-Sentinel that his budget plan and his proposals would not be a net negative in the election.

"I want that debate . . . I'm really eager to have that debate," Ryan told the paper. "That's what we're here for. The reason I want that debate is they have to falsify to make their claims (about his budget). They have no alternative, no solution. All they have is, 'Let's stick with status quo.'"