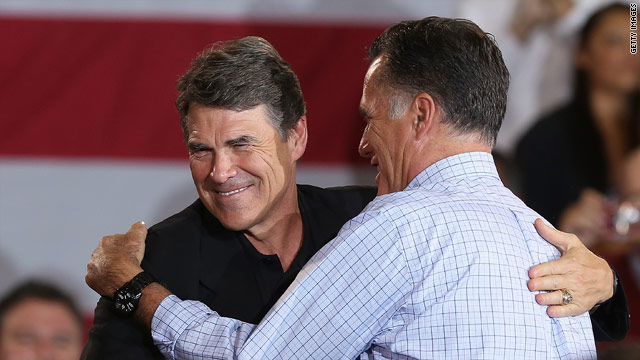 Perry back to Iowa Fair, now stumping for Romney

(CNN) – A year ago in Des Moines, Iowa, Texas governor Rick Perry worked the Midwest crowd, glad-handing his way to voter approval for his own 2012 presidential bid. Saturday, Perry will do the same but for his former opponent Mitt Romney.

Texans for Rick Perry announced Friday that the former Republican contender would campaign for the current presumptive GOP nominee at the annual Iowa State Fair.

Perry will also speak at the FAMiLY Leadership Summit on Saturday afternoon hosted by two Iowa caucus winners in 2008 and 2012: former Governor Mike Huckabee and former Sen. Rick Santorum, according to the organization's website.

Last August, Perry visited the fair with much fanfare as a part of his "Get America Working Again" bus tour as a Republican primary presidential candidate. Perry faced mediocre numbers in the polls before the state's early January first-in-the-nation caucus, bringing in only 10% of Iowa votes on the Republican primary election night.

Perry dropped out of the presidential race in January, endorsing then-candidate and former House Speaker Newt Gingrich. Perry then threw his support behind Romney in April following reports that his chosen candidate would soon end his presidential run as well.