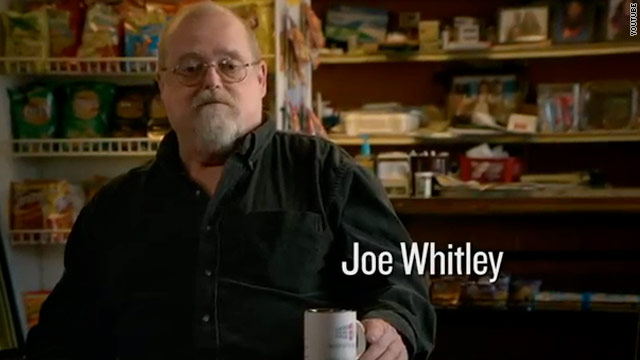 In the new ad, a former employee at a steel plant purchased by Romney's former private equity firm, Bain Capital, talks about how his life changed after the plant shuttered its doors.

Bain acquired GST Steel in 1993, but the company went bankrupt in 2001, two years after Romney ceased day-to-day oversight of Bain.

"The plant was my life, I mean, my livelihood," Joe Whitley, who worked at the plant for 29 years, says in the ad. "Romney and Bain, they were businessmen. They had no idea how to make steel. They knew how to make money."

The newly-unveiled spot marks the latest ad in a series of commercials this summer that attack Romney for his work at the private equity firm and feature laid-off workers from businesses purchased by Bain.

"They used us just like we were the scrap steel that we melted, you know, we were just a means to an end," Whitley says.

Starting next week, the ad is set to run in the battleground states of Colorado, Florida, Pennsylvania, Virginia and Ohio, according to the group. In total, the multiple Priorities ads this year comprise a $20 million television and online buy.

“Just days after the President’s Super PAC released a heinous and despicable ad, and the Obama campaign was caught lying about it, the President’s allies have again come out with another discredited attack," said Romney spokesman Ryan Williams. "After 42 months of unemployment above eight percent, it is clear that the President and his allies don’t have any rationale for reelection. We tried it President Obama’s way and the middle class has paid the price. Mitt Romney has a Plan for a Stronger Middle Class that will jumpstart the economy and bring back millions of jobs.”

While the new spot is hard-hitting, it doesn't go nearly as far as the Priorities ad released Tuesday, which blamed Romney for the death of a former steelworker's wife after the employee lost health care benefits when GST Steel closed down.

Taking a closer look at the controversial ad, CNN found that the man's wife had passed away in 2006, not "soon after" the plant closed down in 2001 like he claimed in the ad.

And while campaigns and super PACs are legally not permitted to coordinate, Obama's campaign is now taking heat for denying it knew details about the man's story, despite featuring him in a conference call with reporters in May.

Tuesday's spot, which has yet to run as a paid TV advertisement, drew fire from Romney's team as evidence that the Obama campaign and its supporters are resorting to "desperate tactics" in the presidential campaign.