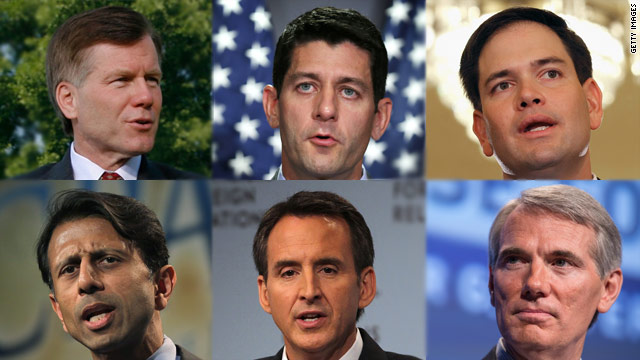 Starting Saturday, the presumptive GOP nominee will blaze through Virginia, North Carolina, Florida, and Ohio - all battleground states in this fall's election.

With less than three weeks before the Republican National Convention in Tampa, speculation has been simmering over who Romney will announce as his vice presidential nominee. The candidate, however, has remained tight-lipped about his prospects, saying only he, his wife Ann, and adviser Beth Myers know the full details of the decision process.

But political observers have a few names in mind, most of whom have been high-profile surrogates for Romney's campaign in recent days, further stirring the pot of suspicion.

What to look for on the bus tour? Three of the states on Romney's route feature top lawmakers rumored to be on the candidate's shortlist. Those names include: Gov. Bob McDonnell of Virginia, who Myers has said sits on the deep bench of "qualified Republicans," Sen. Marco Rubio of Florida, the only contender who Romney has publicly confirmed he was considering, and Sen. Rob Portman of Ohio, who has received an increased amount of attention in recent weeks while taking the trail for Romney.

READ MORE: Portman is case study in campaigning for VP

Also rumored to be on the list–but whose home states aren't on the bus tour itinerary–include former Minnesota Gov. Tim Pawlenty and Louisiana Gov. Bobby Jindal. Both have been stumping for Romney this week in battleground states.

READ MORE: Jindal: 'It's not about the vice president'

House Budget Committee Chairman Paul Ryan of Wisconsin is another name drawing heavy buzz. While he hasn't been as active on the trail for Romney, he has nonetheless been a vocal supporter of the presumptive GOP nominee.

But who are these guys? A recent CNN/ORC International Poll shows that of the several names thought to be considered, Americans are most familiar with Rubio, although four in ten Republicans and nearly half of all Americans are unfamiliar with him.

Romney's campaign won't be the only one out on the highways. The Democratic National Committee will shadow the bus tour, making stops along the same path as the Romney bus in an effort to draw a contrast between the candidate and Obama.

And recent polls show the former governor could use a boost. Three surveys released in the last two days indicate President Barack Obama has expanded his margin over Romney, less than three months before Election Day. According to a new CNN/ORC International poll, 52% of registered voters say they would back the president, while 45% are backing Romney.