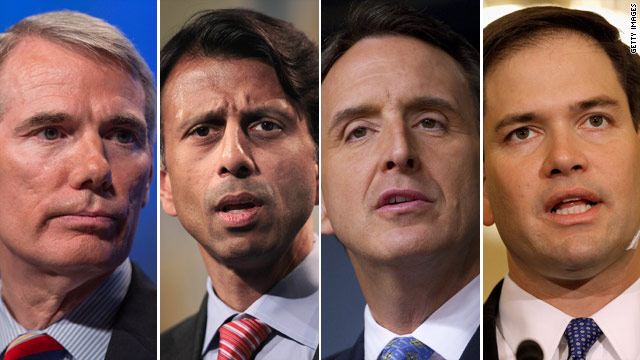 (CNN) - They might be called the "almosts" - those thought or known to be on the short list considered by Mitt Romney for his number two spot.

Republican sources told CNN Chief National Correspondent John King that Sen. Rob Portman of Ohio, Sen. Marco Rubio of Florida, and former Gov. Tim Pawlenty of Minnesota - all thought to be on the candidate's short list - received calls from the Romney campaign prior to the announcement.

At an event in Manchester, N.H. on Saturday morning, Pawlenty praised Romney's choice of Rep. Paul Ryan of Wisconsin.

"His selection this morning of the great congressman and the chairman of the House Budget Committee and that great bold leader Paul Ryan, they're going to be a great team for America as president and vice president," Pawlenty said.

In an earlier paper statement, he called Ryan a "bold thinker" and said "his selection will also help Governor Romney win the key swing state of Wisconsin. I am excited about a Romney-Ryan ticket and look forward to doing all I can to help them win this election."

"Throughout his life, Mitt Romney has made great decisions, and choosing Paul Ryan as his running mate is a truly inspired choice," Rubio said in a statement. "I got to know Paul during my Senate campaign when he endorsed me early on when I was still considered a long shot. Paul Ryan is a courageous reformer who understands our nation's challenges, has proposed bold policy solutions to solve them, and has shown the courage to stand up to President Obama and other Washington politicians trying to tear him down.

"The Romney-Ryan ticket is going to win in November because it offers the American people visionary leadership to recapture the free enterprise spirit that has empowered countless Americans to build businesses from scratch and live the American dream," he continued. "I'm excited about the visionary change a Romney-Ryan team will bring to Washington, and I look forward to campaigning with them this fall."

Portman was set to participate in a 100-mile charity bike ride in Ohio on Saturday, and released a statement saying, "Mitt Romney has made a great choice in Paul Ryan. He is an accomplished public servant and a leading voice on the most pressing issues facing our country. Paul is one of my best friends in Congress and someone I have worked closely with as a former colleague on the House Ways & Means Committee.

"Jane and I wish Paul and Janna and their kids the very best," his statement continued. "As the Chairman of the Romney campaign in Ohio, I look forward to working with Paul to ensure that the Romney-Ryan ticket carries Ohio and is victorious in November. Most importantly, as a member of the Senate, I look forward to working closely with a Romney-Ryan Administration to restore fiscal sanity and enact pro-growth policies to create jobs."

Louisiana Gov. Bobby Jindal released a statement through the Romney campaign which read, "Paul is a good friend and one of the smartest guys I served with in Congress. He has the courage of his convictions, which is what our nation needs."