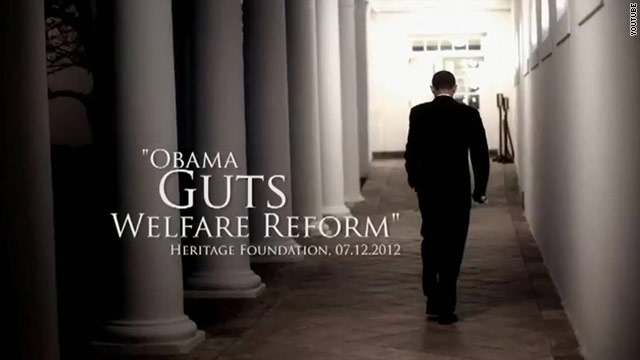 The narrator in TV ad, released Monday morning by the campaign of the GOP presidential challenger and by the Republican National Committee, says that "Barack Obama has a long history of opposing work for welfare."

The spot then includes sound of Obama from June of 1998, with the then-Illinois State Senator saying "I was not a huge supporter of the federal plan that was signed in 1996."

The ad continues with the narrator adding that "on July 12th, Obama quietly ended work requirements for welfare. You wouldn't have to work and wouldn't have to train for a job. Mitt Romney strongly believes work must be part of welfare."

That theme was first highlighted in a Romney campaign commercial released last Tuesday and by the presumptive GOP nominee on the campaign trail last week.

An independent and non-partisan fact-checking organization, PolitiFact, rated the ad's claim as "Pants on Fire." And the Obama campaign, the White House and former President Bill Clinton, who signed the original legislation into law, all attacked the Romney spot, saying the claims were false and misleading.

And Friday the Obama campaign countered the Romney campaign commercial with a spot of their own, with the narrator in the ad saying "See this? Mitt Romney claiming the president would end welfare's work requirements? The New York Times calls it 'blatantly false'. The Washington Post says: 'the Obama administration is not removing the bill's work requirements at all'."

Regardless of the pushback, it's apparent that the Romney campaign will continue to attack the president over welfare. A Romney campaign aide tells CNN that Ryan will push the theme that Obama "has a long history of opposing work for welfare and who just last month took action to dismantle welfare and its work requirements" at a campaign event Monday in the battleground state of Iowa.

"The bottom line is that President Obama... recently gave states more tools to help more more people from welfare to work as quickly as possible," he said. "He has strengthened the welfare system, he has not weakened it as Romney falsely claims."

And Sunday night, at a Romney-Ryan rally at the GOP vice presidential candidate's homestate of Wisconsin, Ryan said that "we see a president who took what we pioneered here in Wisconsin, Tommy Thompson, welfare reform, getting people off of welfare and back to work and the lives of dignity, personal responsibility, on to a life of hitting their potential. If this president is going to do these kinds of things in a very difficult tough election year, imagine what he would do if he never has to face to voters ever again? You know what? We’re not going to find out."

As is their practice, the Romney campaign would not reveal any details on where the new commercial will run or on the ad buy.