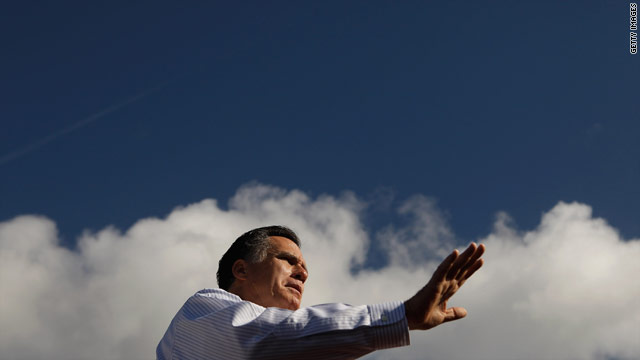 "The Obama Campaign has reached a new low," declared Mitt Romney campaign Press Secretary Andrea Saul in a Tuesday statement battering Vice President Joe Biden, who at a speech earlier Tuesday said Romney would deregulate the financial sector and "put y'all back in chains."

Just over an hour later, she emailed reporters another statement billed as a "Response to President Obama's Newest Low."

In a campaign which has been brutal and nasty on both sides - by one metric, plagued with ads significantly more negative than those aired in the last campaign for the White House - the Romney campaign's response that Obama, the Democrats, and their allies are hitting "new lows" has become a familiar refrain.

The Team Romney-termed Tuesday low of the Obama campaign was apparently a decline from Saturday, when Romney introduced his new running mate and said that while "the president's campaign is taking American politics to new lows, we're going to do something very differently."

And, presumably, it was lower than the Obama campaign stood Thursday, when Romney adviser Barbara Comstock told CNN's Kate Bolduan that a new ad by the Obama campaign "is definitely a new low." Comstock said the incumbent's campaign sunk to that benchmark by "lying yesterday about knowing the story of this gentleman" who appeared in a pro-Obama super PAC ad which linked Romney to the death of the man's wife. An Obama spokeswoman initially said the Obama campaign was unaware of the man's story, although it emerged the campaign had once used his story in a briefing for reporters.

At the same time she maintained a Romney fundraising pitch which referenced the anti-Romney ad was "not at all" a new low.

And after Senate Democratic Leader Harry Reid said someone - whose identity he has not revealed - told him that Romney had not paid taxes in years, Romney adviser Eric Fehrnstrom told CNN's Candy Crowley that "the Obama campaign has turned into a bottomless pit. Everyday they seem to reach a new low."

Romney campaign manager Matt Rhoades responded, "President Obama's campaign hit a new low today when one of its senior advisers made a reckless and unsubstantiated charge to reporters about Mitt Romney that was so over the top that it calls into question the integrity of their entire campaign."

A review of press releases and statements suggests the supposed decline picked up in intensity last May. That month, the Romney campaign press secretary, Saul, said in an email to reporters that "President Obama and his administration have sought to blame America first, yet Vice President Biden's reckless statement yesterday blaming America for – of all things – the progress of Iran's nuclear weapons program, has reached a new low."

Earlier in May, Republican National Committee Co-Chairwoman Sharon Day remarked in a statement, "Democrats and their Big Labor allies in South Carolina have sunk to a new low, with the president of the state AFL-CIO bashing a piñata effigy of Gov. Nikki Haley with a baseball bat."

But as far back as April, Romney's campaign emailed reporters charging that "President Obama's government by gimmick is reaching another new low today," and RNC Communications Director said Obama "and his desperate Chicago campaign have resorted to the very tactics they campaigned against less than four years ago... he has taken politics to a new low."

A search of archived press releases and transcripts for those referencing "new low" and "Romney" found over 300 results in the past year. Although peppered throughout those results are a few reports on mortgage rates, public opinion polls, and mentions not directly related to the campaign, the volume of examples related to the campaign indicates how often surrogates and supporters of the Massachusetts Republican use the phrase in interviews, and how those words have become lodged in the political discussion.

Democrats have, on occasion, fired the charge back at Romney and his allies. Democratic National Committee Chairwoman Debbie Wasserman Schultz told reporters on a conference call in June that "today, we learned that Mitt Romney has truly sunk to a new low." She organized the call in response to a news report that the Romney campaign had asked some governors to downplay good economic news in their state for political gain - a report the Romney campaign denied.

And with every claim of a "new low" comes the distinct possibility that the presidential campaigns will struggle to reach new heights.