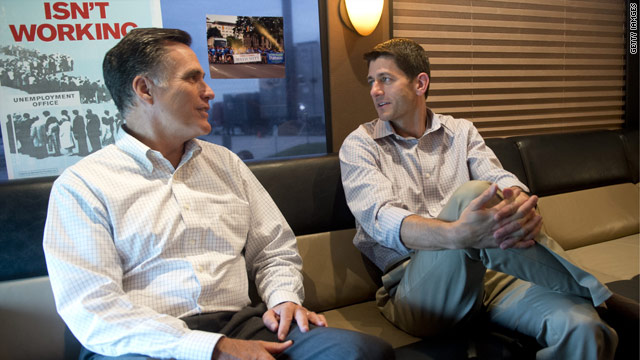 (CNN) - Voters in Ohio and Nevada, the states which Mitt Romney and Paul Ryan will visit on Tuesday, may encounter a web ad or mailer hitting the Republican candidates on the issues of Medicare and Coal.

Worker's Voice said it plans to spend $50,000 on web advertisements in Nevada which tie the Medicare plan proposed by Ryan to Romney and to Sen. Dean Heller.

Romney is to campaign in Ohio on Tuesday and Ryan heads to Las Vegas in the evening after an afternoon event in Colorado.

The online buy is small compared to the millions spent in key states by some groups, which invest primarily in television advertisements. Federal Election Commission records show the group has approximately $1.88 million cash on hand and has raised $7.1 million so far this cycle.

One version of the web ad, which the group says will be displayed on the website of the Las Vegas Sun, refers to the "Romney-Ryan-Heller plan," which it claims would "double seniors’ costs, raise retirement age, and throw seniors back into Rx drug donut hole."

Ryan's Medicare and budget plan has drawn a spate of criticism from Democrats, who have tied Romney to the plan, while Romney has not said that it will be a part of his platform. Democrats say Ryan would dismantle the program, while Ryan and Republicans say their reforms are aimed at keeping the program solvent.

In Ohio, voters may find a mailer which quotes AFL-CIO President Richard Trumka saying, "We can't afford people like Mitt Romney who are putting corporate profits before worker health and safety."