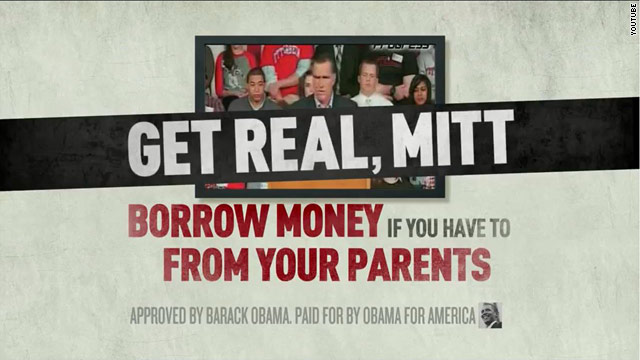 (CNN) – Mitt Romney's suggestion that students struggling to pay for higher education should ask their parents for help was met with a tough retort in an ad released Tuesday from President Barack Obama's campaign: 'Get real.'

In the 30-second spot that the campaign says will air in Colorado, Iowa, Nevada, Ohio and Virginia, Romney is shown saying: "Take a risk, get the education, borrow money if you have to from your parents."

"Hope they can afford it," a narrator in the ad replies. "Romney's plans could cut college aid for nearly ten million students and eliminate the tax deduction for college tuition."

Romney's remarks, which came during an April address at a college in Ohio, encouraged students to take risks in order to become successful.

"We've always encouraged young people: Take a shot, go for it, take a risk, get the education, borrow money if you have to from your parents, start a business," Romney said.

The ad ends with an appeal from the narrator: "Get real, Mitt."

In April, Romney said that he supported extending lowered rates on a popular federal student loan program for low- and middle-income undergraduates, the same position as Obama.

Asked late last year about the rising cost of higher education, Romney suggested then that market forces would lead some colleges to lower the price of receiving an education in order to compete in attracting cost-conscious students.

In supporting the claim that Romney "could cut college aid for nearly ten million students," Obama's campaign points to analysis of the proposed House GOP budget that would cut funding for federally-subsidized Pell grants. Romney has not said whether or not he would support that aspect of the plan, which was proposed by his new running mate, House Budget Committee Chairman Paul Ryan.