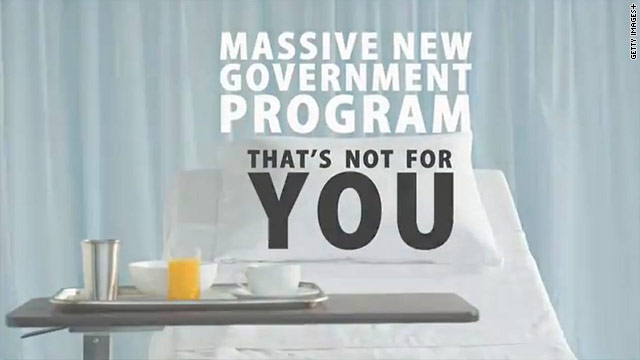 (CNN) - Mitt Romney's campaign is taking their pushback on Democratic attacks on Paul Ryan's Medicare plan from the campaign trail and surrogate interviews to the commercial breaks.

The Republican presidential campaign announced Tuesday that they're going up with a new TV ad that claims that President Barack Obama's cut more than $700 billion from Medicare.

"You paid in to Medicare for years. Every paycheck. Now, when you need it Obama has cut $716 billion dollars from Medicare," says the narrator in the commercial. "Why? To pay for Obamacare. So now the money you paid for your guaranteed healthcare is going to a massive new government program that's not for you. The Romney-Ryan plan protects Medicare benefits for today's seniors and strengthens the plan for the next generation."

The Romney campaign says the new 30-second spot will start running on Wednesday and describes the ad buy as "significant."

The charge by the Romney campaign is part of their coordinated response to Democratic attacks on Ryan's controversial proposals to alter Medicare. The House Budget chairman's plans call for a partial privatization of the government's national insurance program for seniors, but only for those under age 55.

Minutes after Romney named Ryan as his running mate on Saturday morning, the Obama campaign and fellow Democrats instantly attacked Ryan over his budget, terming it a "radical plan" that would benefit the rich at the detriment to the middle class, and they highlighted his proposals to alter Medicare, which they said would "end Medicare as we know it."

The Romney campaign and its surrogates quickly responded, and both sides are continuing their attacks.

"When he ran for office he said he'd protect Medicare, but did you know that he has taken $716 billion out of the Medicare trust fund – he's raided that trust fund – and you know what he did with it? He's used it to pay for Obamacare – a risky, unproven, federal government takeover of healthcare – and if I'm president of the United States we're putting the $716 billion back," said Romney Tuesday at a campaign event in Ohio.

The strategy is simple: Accuse the president of robbing a popular program (Medicare) to pay for a program (The Affordable Care Act) where support is divided among the public. A Romney campaign official says "the message here is that we are on offense on Medicare. This is a debate we invite."

The Romney campaign is getting the $717 billion figure from a July 24 Congressional Budget Office report, which measured the impact of repealing the health care overhaul law, which is known by many as "Obamacare."

The Obama campaign says the Romney claim is wrong.

"The president took away subsidies, unwarranted subsidies to insurance companies, and he used that money to help lengthen the life of Medicare by nearly a decade. So when Gov. Romney says he doesn't support that, obviously, you know, that's problematical," senior Obama campaign adviser David Axelrod told CNN's Soledad O'Brien on "Starting Point" Tuesday.

And minutes after the Romney campaign's announcement of the ad, the Obama campaign was quick to respond.