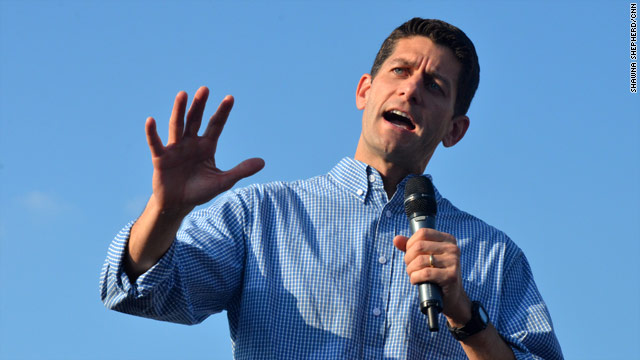 Ryan hits Obama on Medicare, accusing his campaign of 'anger'

Oxford, Ohio (CNN) – Rep. Paul Ryan on Wednesday called President Barack Obama's criticisms of his Medicare proposal a "distraction," and picked up a line from his running mate Mitt Romney that accuses Obama of running an election "based on anger and division."

"You see our payroll taxes from our paychecks are supposed to go to two programs: Social Security and Medicare, period. Now because of President Obama they're also going to pay for Obamacare," he said.

"It's not right. He knows it. He can't defend it. And that is why he's resorting to this kind of distraction and an election based on anger and division," Ryan continued.

Ryan's proposal to change Medicare, which he has pitched as a way to prevent the program from going bankrupt, has became a prime target for Democrats after Romney introduced the House Budget Committee chairman as his running mate on Saturday.

In recent days, surrogates and supporters of Romney have stepped up their defense of Ryan, but the candidate has steered clear of addressing the issue at public events - until he took to this stage at Miami University of Ohio, his alma mater.

Some have suggested the issue could prove a liability among current Medicare recipients and those approaching eligibility.

Older voters typically vote in higher proportion than do younger voters, and they make up significant slices of the electorate in some key states such as Florida, where Romney took his campaign on Monday.

But instead of running away from the issue, Ryan urged his supporters to keep the debate alive.

"The president I'm told is talking about Medicare today. We want this debate. We need this debate and we will win this debate," he told cheering supporters.

Voices in the supportive audience called out, "No," and Ryan responded, "Well, neither do I."

A Romney aide traveling with Ryan said the candidate crafting these remarks on his flight from Las Vegas to Dayton. Reporters could see him at one point standing in the aisle conferring with aides. Ryan was holding a couple sheets of paper with handwritten notes and lines crossed out.

The $716 billion figure cited by Ryan and other Republicans comes from a July 24 Congressional Budget Office report, which measured the impact of repealing the health care overhaul law.

The report says that under the repeal measure, "spending for Medicare would increase by an estimated $716 billion over that 2013-2022 period." Those spending increases would be a result of more spending on hospital and medical insurance, offset by a decrease in prescription drug coverage.

Romney suggests that to not repeal the health care law results in the opposite, a $716 decrease in Medicare spending – something the letter specifically says would not be the case.

Ryan's proposals, first introduced in 2011, include the provision that Medicare-approved private insurers would one day compete with traditional Medicare on an exchange. The proposal would not affect Americans over age 55. The plan's opponents say that would increase the financial burden on senior citizens.

On his website, Romney says Ryan's Medicare proposal "almost precisely mirrors Mitt's ideas," which include repackaging Medicare spending "as a fixed-amount benefit to each senior that he or she can use to purchase an insurance plan."

Obama, meanwhile, defended his record on Medicare in Iowa, saying Republican attacks such as Ryan's were false and that his rivals' proposals were unsellable.

"I think they know their plan's not very popular," the president said. "You can tell that because they're being pretty dishonest about my plan, especially by the way when it comes to Medicare. Now this is something I've got to point out here because they are just throwing everything at the wall to see if it sticks."

Ryan's Medicare proposal has been hit hard by Democrats as a plan to gut the program, though Ryan has said it is necessary to keep the program solvent.

His comments Wednesday about Medicare were some of his first on the topic as the GOP vice presidential candidate. Ryan focused on the economy and energy at a rally in a Denver suburb Tuesday, and later, at an event in Las Vegas, Ryan turned his attention to the housing crisis and Nevada's high unemployment rate.