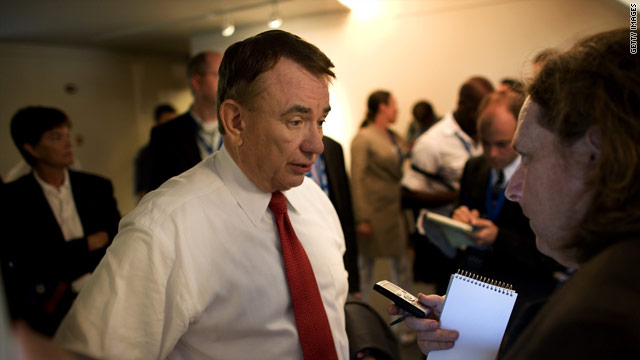 The former governor will now run against Democratic Rep. Tammy Baldwin in the general election. The victor in that race will replace Sen. Herb Kohl, a four-term Democrat who is not running for re-election.

While Thompson had high name recognition, he was out-raised by more than 2 to 1 by Hovde, who serves as the CEO of the real estate company Hovde Properties. According to Federal Election Commission filings, Hovde brought in $5.5 million this cycle, compared to Thompson at $2.4 million.

Polls released prior to the primary showed Thompson as the frontrunner among four candidates, though his margin over opponents had been dwindling in recent weeks, making the battle more competitive. Thompson made a short-lived presidential bid in 2008.

Two other recent polls, however, show Thompson and Hovde in a statistical dead heat.
Facing questions about his age, Thompson, 70, made headlines last week when he dropped and did 50 push-ups for the editorial board at the Milwaukee Journal Sentinel.
"I do 100 sit-ups in the morning," he told the newspaper. "I do my push-ups and then I do my sit-ups."

Neumann, meanwhile, had seen strong grassroots conservative support. Last week, the Tea Party Express endorsed the former congressman, saying he is the "only one with a plan that cuts spending, balances the budget and repeals ObamaCare." Two major conservative super PACs-Senate Conservative Fund and Club for Growth-also back Neumann.
However, another group supportive of tea party-aligned candidates, FreedomWorks, split with other national conservative groups and endorsed Hovde last month.

A fourth candidate, assembly speaker Jeff Fitzgerald, is best known for being a chief advocate in the push for Gov. Scott Walker's plan to curb collective bargaining rights for state workers, a law that was praised by national Republicans but ultimately landed the governor in mammoth fight to keep his seat in a high-profile recall effort.

Of the crop of Senate hopefuls, however, Fitzgerald lagged far behind in fundraising, bringing in $160,000 this cycle.

Wisconsin also marks an important state in the presidential election. While CNN's electoral map rates the state as leaning toward Obama in the fall election, Mitt Romney's selection of Rep. Paul Ryan as his running mate this weekend suggests that the Romney campaign considers the Badger State up for grabs in November.

In June, shortly after Gov. Scott Walker survived the contentious recall effort, Romney also hinted that the state could soon fall in the GOP column, though it hasn't voted for a Republican presidential candidate since 1984.

"A blue state said we've seen a conservative governor, he cut back on the scale of government and has held down taxes and stood up to the public sector unions, and we want more of that not less of it. And I think you're going to find that in the decision that's being made in November," Romney said during a tele-town hall with small business owners.

Ryan, who returned to the state for a hometown hero's welcome Sunday night, had not made an endorsement in his state's Republican Senate battle.

– CNN's Kevin Liptak and Gregory Wallace contributed to this report.