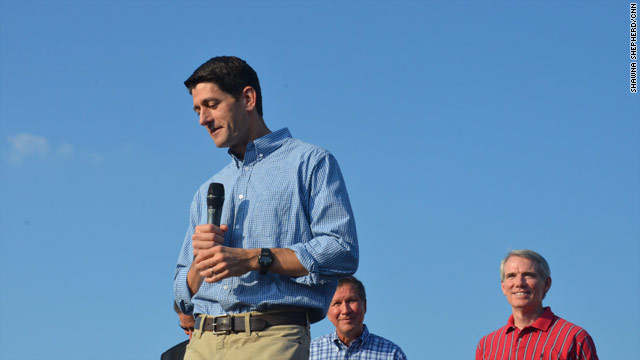 Oxford, Ohio (CNN) – A few days ago, Sen. Rob Portman was touted as being on the short list under consideration as Mitt Romney’s running mate. Despite being passed over when the nod went to Rep. Paul Ryan of Wisconsin, Portman was on hand and enthusiastic Wednesday at a GOP rally in Ohio featuring now-vice-presidential candidate Ryan.

Appearing together at Ryan’s alma mater - Miami University of Ohio - Portman praised the House Budget Committee chairman for his work on Capitol Hill and called him “a good friend.”

“He is one of those guys in Congress that is there for the right reasons - and you know what that reason is? It is about his family, it’s about your family, it’s about being sure that the American dream can be restored,” said Portman. “It’s not partisanship, its not about who is up, who is down. It is about what is best for our country that is why we need him as vice president of the United States.”

The crowd at the event, held outside on an enormous grass field, was enthusiastic but were not as fired up as the crowds at the rallies held earlier in the week in Iowa, Colorado and Nevada.

Ryan jogged to the runway-like stage and bounded up before the crowd lined up along one side. Portman and Ohio Gov. John Kasich stood behind Ryan as he addressed the surrounding crowd of more than a thousand people.

Ryan reminisced about his college days, then reached into his pocket and pulled out something Portman had given him.

Ryan said, “The gentleman who just introduced me just gave me his lucky Ohio buckeye. He carried it with his entire Senate race. Rob is a very close friend; we've been through a lot together.”

The 42-year-old running mate said Portman, who could have been Romney’s vice president, had given him advice on how to balance politics and family.

“I remember meeting (Portman’s children) Will and Sally when they were out with Rob and he gave me a lot of good personal advice about how to be close to your family and be a good public servant in Congress and I just want to tell you what a special man this is,” said Ryan.

Portman told CNN about the conversation with Romney when the White House hopeful told him, “I’ve chosen someone else.” Portman remains a top surrogate for the campaign and is helping efforts in his home state that is critical to the GOP in November.

Kasich shared a personal story about how the Portman family reacted to the news that the Ohio senator was not going to be Romney’s running mate.

It turns out they already had a vice president in the family.

“It was sort of funny because as you know he was seriously considered for this job,” Kasich said, “17-year-old Sally is the vice president of her class, and Rob’s wife said this family can only stand one vice president at a time.”