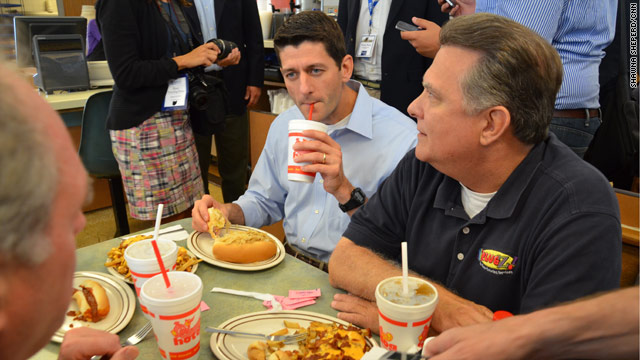 Defending his reform proposals in a Sunday interview, the newly minted VP candidate noted the concerns seniors may have about change to the government program by saying his own mother is on Medicare and lives in the battleground state of Florida.

This Saturday Ryan's mother will join him on the stump in The Villages, Florida, according to Ryan traveling press secretary Michael Steel.

Meanwhile, at a campaign rally in North Canton, Ohio, Ryan continued to hit President Barack Obama about his changes to Medicare and later he addressed the concerns about his own plan in Warren.

Ryan made his comments Sunday in a joint interview with Mitt Romney on CBS's "60 Minutes," a day after he was announced as Romney's running mate.

"My mom is a Medicare senior in Florida," he said on CBS. "Our point is we need to preserve their benefits, because government made promises to them that they've organized their retirements around."

While Ryan has accused the president of "raiding" Medicare to pay for Obamacare, in Thursday's remarks he also addressed critics who claim his budget blueprints include the same cuts.

The House Budget Committee chairman tried to explain that the budget he helped write had to include a baseline for Obama's health care law. He said Thursday he voted to repeal Obamacare and made the point, "we would never have done it in the first place."

"First of all, those are in the baseline, [Obama] put those cuts in. Second of all, we voted to repeal Obamacare repeatedly, including those cuts. I voted that way before the budget, I voted that way after the budget. So when you repeal all of Obamacare what you end up doing is that repeals that as well," Ryan said to a reporter who asked him to respond to the criticism over lunch at The Original Hot Dog Shoppe.

Ryan continued, "In our budget we've restored a lot of that. It gets a little wonky but it was already in the baseline. We would never have done it in the first place. We voted to repeal the whole bill. I just don't think the president's going to be able to get out of the fact that he took $716 billion from Medicare to pay for Obamacare."

Obama and his re-election team have aggressively gone after Ryan since he joined the Republican ticket five days ago.

"Congressman Ryan knows that the $716 billion in Medicare savings that he included in two of his own budgets do not cut a single guaranteed Medicare benefit. It's a shame that someone picked for his 'strong beliefs' is now abandoning them just to help Mr. Romney score a political point," Obama campaign spokesman Danny Kanner said in a statement.