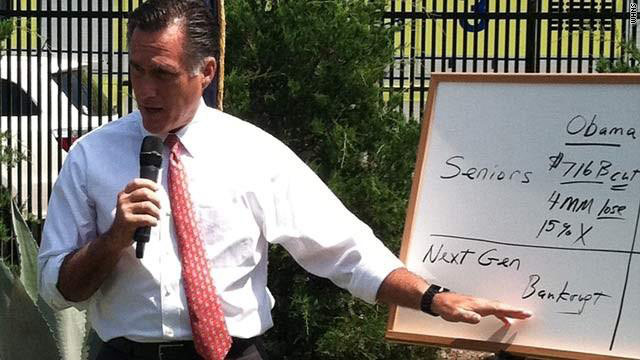 Whiteboard lessons from the campaign trail

(CNN) – It's back to the drawing board for the presidential campaigns.

Both sides took to whiteboards Thursday to explain their competing theories over how certain budget proposals affect Medicare - the popular entitlement program for seniors.

Republican presidential challenger Mitt Romney first used a whiteboard to tutor reporters in South Carolina on Thursday, jotting down numbers as he explained his plan to reform Medicare and reiterating attacks that Obama cut $716 billion from the program.

"The differences in our Medicare perspective could not be more stark and dramatic," Romney said at a news conference in South Carolina. "As the seniors in America understand what the president's plan is doing to Medicare, they're going to find it unacceptable."

Romney used his whiteboard to explain that under President Barack Obama's plan Medicare Part A, which includes inpatient care in hospitals, would run out for the next generation of seniors, also saying his plan would make Medicare "solvent."

President Obama's campaign refuted the explanation, releasing their own whiteboard lesson in an email to reporters to explain their side of the Medicare debate. 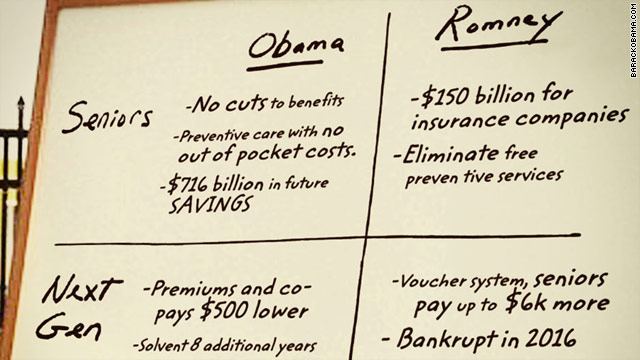 The Obama campaign whiteboard diagram uses the same format as Romney's whiteboard lecture, juxtaposing the president's Medicare plan and his Republican rival's, and using bullet points to highlight what the campaign claims would be the affects of each side's plan to seniors and the "Next Gen."

"The President has extended the life of the program by nearly a decade. If Romney had his way, it would run out of money by 2016," the Obama campaign said in a statement about their whiteboard, adding that the Affordable Care Act would save $716 billion without cutting benefits to the program's recipients.

The Obama campaign statement about the release of the whiteboard links the presumptive GOP nominee with his newly minted running mate, Rep. Paul Ryan of Wisconsin, the architect of the House budget proposal that democrats have said would "gut" Medicare for seniors.

"Congressman Ryan included the same savings in his budget, which Romney called 'marvelous' and said he'd sign into law," the statement said.

"But it makes sense that Romney wouldn't want to tell the truth: the Romney-Ryan budget eliminates the guarantee of Medicare and instead provides people with a voucher to buy health care," the Obama campaign said in the statement. "In fact, a voucher plan authored by Paul Ryan and endorsed by Romney would cost future retirees an additional $6,400."

Romney says his plan would partially privatize Medicare for future seniors but would also give the option for access to the current program. It would also involve means-testing the program's recipients based on income levels to determine government funds.

The notable shift in the political discussion from job numbers and the economy to Medicare and health care reform came after Romney's announcement of his choice of running mate. Democrats have called Ryan's budget proposal 'radical,' altering the Medicare program.

The Romney campaign, in turn, has said they are taking the offensive on the Medicare debate, dispelling that argument that the Obama campaign won the message war in light of the current topic of conversation on the campaign trail. The Republican's campaign also released a television ad Wednesday hammering home the campaign's message.

The Obama campaign has yet to release an ad solidifying their position on Medicare but campaign officials said in conference call Thursday that the response isn't far off.

"We are the ones that brought up the topic," Romney told reporters in South Carolina when asked if the issue was a distraction from his campaign’s economic message.