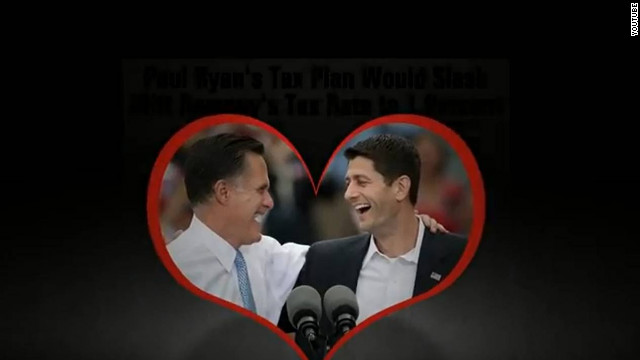 (CNN) – The super PAC backing President Barack Obama launched an online ad on Friday reminding viewers that Mitt Romney has rejected calls to release more than two years of tax returns, and claiming that a plan offered by his running mate, Paul Ryan, would reduce his tax rate to 1%.

The spot, from Priorities USA, uses clips from Romney's press conference on Thursday in South Carolina, when he told reporters that he's paid 13% in taxes for the past decade.

"The fascination with taxes I paid I find to be very small minded," Romney is shown saying.

"Romney and Ryan: If they win, the middle class loses," the narrator concludes.

Priorities USA cites analysis of Ryan's House GOP Budget plan, which proposes eliminating taxes on interest, capital gains, and dividends. The two years of tax information that Romney has released, from 2010 and 2011, indicate that the majority of his income – $21.7 million in 2010 – came from long-term capital gains.

Romney has not indicated specifically which parts of Ryan's plan he supports and which parts he would change. Romney's website indicates that he would maintain current tax rates on interest, dividends, and capital gains, while enacting a "permanent, across-the-board 20 percent cut in marginal rates."

Bill Burton, a co-founder of Priorities USA, said in a statement that under a Romney presidency, wealthy people like Romney would be awarded a lower tax rate.

In declaring he's paid more than 13% in taxes on Thursday, Romney was describing his effective tax rate, or the percentage of actual income he gave to the federal government. Over the past two years, Romney's effective tax rate was 14.5%, based on the records he's revealed already. Some 80% of Americans have an effective rate below 15%, according to the Tax Policy Center.

Effective tax rates are always lower than top income tax rates, due to credits, deductions and exemptions that cancel out all or much of the income tax many Americans would otherwise owe.

Priorities USA said its ad would run online in Colorado, Florida, Ohio, Iowa, Pennsylvania and Virginia – all battleground states. The pro-Obama super PAC is the same group that produced a much-maligned spot connecting Romney's tenure at Bain Capital to the death of a steel worker's wife. The ad never ran as a paid advertisement on television, apart from a single airing in Ohio after a station error. It did, however, air repeatedly on cable news.

“This is another false ad from a widely-denounced group with zero credibility," Romney campaign spokeswoman Amanda Henneberg wrote in response to the latest Priorities USA ad. "There’s only one candidate in this race who has promised to raise taxes – Barack Obama. Mitt Romney supports revenue-neutral tax reform that lowers rates across the board – for all taxpayers – and maintains the progressivity of the current code. President Obama’s failed policies have led to record-level unemployment and 23 million Americans struggling for work. Mitt Romney’s Plan for a Stronger Middle Class will mean more jobs, more take-home pay, and a stronger economy.”