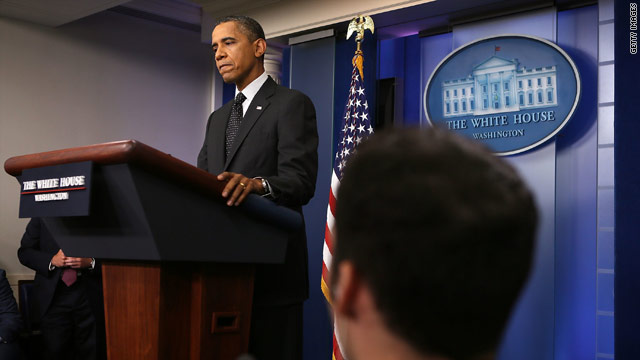 Asked about the ad created by a pro-Obama super PAC, Priorities USA Action, which linked presumptive Republican nominee Mitt Romney to the death of a steelworker's wife during his tenure at Bain Capital, Obama said that he does not think that Romney is responsible for the woman's death.

"Keep in mind, this is an ad that I didn't approve, and I did not produce and as far as I can tell, has barely run. I think it ran once," said Obama.

The ad was announced in early August and aired as a paid commercial only once in Ohio, an accident by the station, according to Priorities' senior strategist Bill Burton. But the ad ran over and over as part of the cable news debate that it sparked.

An analysis by CNN poked holes in the Priorities' ad's timeline, showing Romney had left the private equity firm before the company shut down GST Steel and Joe Soptic, the cancer patient's husband and the narrator in the ad, subsequently lost health insurance.

In the briefing, Obama quickly pivoted to a series of attacks ads created by Romney's campaign claiming that the president's administration would drop work requirements from the federal welfare program.

The latest in a series of three commercials was announced Monday morning and continues claims that the Obama administration is attempting to alter the federal welfare-to-work program.

"In contrast, you have Governor Romney creating as a centerpiece of his campaign, this notion that we are taking the work requirement out of welfare," said Obama.

The president continued: "What (Romney) is arguing is that we have somehow changed the work requirement in our welfare laws. And, in fact, what has happened was that my administration responding to the requests of five governors, including two Republican governors, agreed to approve giving them, those states, some flexibility in how they manage the welfare rolls as long as it produced 20% increases in the number of people who are getting work."

Independent fact-check organizations have called the claims in one of the previous ads by the Romney campaign false and misleading. Team Romney has stood by their advertisements, which continue broadcasting.