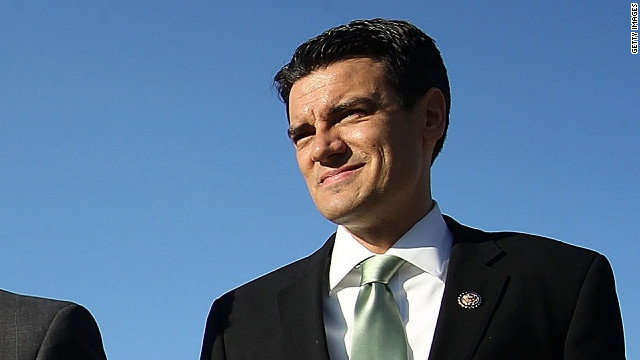 Rep. Kevin Yoder of Kansas apologized after a report indicated he skinny dipped in the Sea of Galilee.
August 20th, 2012
08:18 AM ET

(CNN) – A group of House Republicans were scolded last year for their behavior during a fact-finding trip to Israel, including skinny dipping in the Sea of Galilee, a spokesman for GOP Majority Leader Eric Cantor said late Sunday after reports of the incidents were published online.

"Twelve months ago, [Cantor] dealt with this immediately and effectively to ensure such activities would not take place in the future," Cantor spokesman Doug Heye wrote in a statement.

On Sunday Politico reported that 30 GOP lawmakers went on the trip to Israel in August 2011, some with their families. At least one traveled to Israel with his wife, who was more than eight months pregnant. According to the report, many of the lawmakers, their aides, and family members took a late night swim in the Sea of Galilee in various states of undress.

The report said Rep. Kevin Yoder of Kansas went swimming completely nude. He apologized in a statement to Politico, writing "regrettably I jumped into the water without a swimsuit."

"It is my greatest honor to represent the people of Kansas in Congress and [for] any embarrassment I have caused for my colleagues and constituents, I apologize," Yoder continued in the statement.

The wife of a second congressman, Rep. Ben Quayle of Arizona, wrote in a statement to CNN that neither she nor her husband had any knowledge of the skinny dipping incident.

"Ben and I and our daughter Evie were there together that evening in the Holy Land, although I was eight and a half months pregnant with her," Tiffany Quayle wrote. "We were neither party nor witness to any of the inappropriate behavior described in the article, nor were we a part of, or aware of any inquiry. We did return to Arizona with some water from the Sea of Galilee to baptize Evie after she was born."

Other lawmakers named in the Politico report included Rep. Steve Southerland of Florida, Rep. Tom Reed of New York, Rep. Jeff Denham of California and Rep. Michael Grimm of New York. . The report also indicated that the FBI initially looked into the incident.

The Sea of Galilee is an important religious site for Christians, and is where the Bible says Jesus walked on water and fed 5,000 people.

A spokesman for the Democratic Congressional Campaign Committee, which is charged with electing Democrats to the lower chamber, wrote in a statement Monday the Israel antics looked "more like a scene out of Animal House than a delegation of Members of Congress representing America in Israel – one of our most important security partners."

CNN's Kate Bolduan and Greg Morrison contributed to this report.