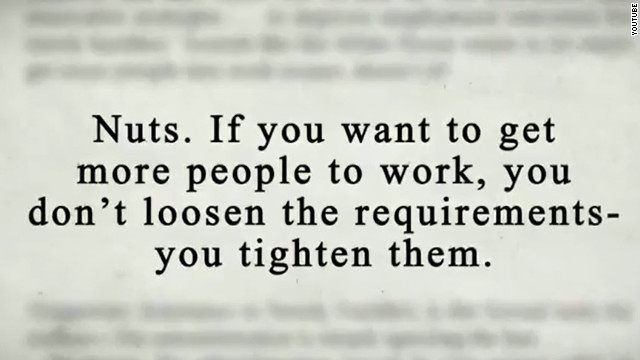 (CNN) - For the third week in a row, Mitt Romney's up with a new television commercial that claims President Barack Obama is altering the federal welfare-to-work program by dropping work requirements in the law.

"One of the most respected newspapers in America called it 'nuts,' saying 'If you want to get more people to work, you don't loosen the requirements – you tighten them. Mitt Romney's plan for a stronger middle class will put work back in welfare," adds the narrator.

The newspaper touted in the spot is the Richmond Times-Dispatch, the primary daily newspaper for Virginia's capital city. Richmond is a major media market in the crucial battleground state.

An independent and non-partisan fact-checking organization, PolitiFact, rated one of the Romney campaign's earlier ad's claim on welfare as "Pants on Fire." And the Obama campaign, the White House and former President Bill Clinton, who signed the original legislation into law, all attacked the earlier spots, saying the claims were false and misleading.

The Obama campaign responded Monday to the new commercial.

"Mitt Romney continues to run ads that independent news organizations, former President Clinton, and the Republican co-author of welfare reform have said are not true. The Obama administration has strengthened the welfare to work requirement, not weakened it. Just one week after pledging to run a substantive campaign, and whining about the negativity in this race, it's clear Mitt Romney has absolutely no intention of living up to that pledge," said Obama campaign spokeswoman Lis Smith.

Friday the Obama campaign countered the Romney campaign commercial with a spot of their own, with the narrator in the ad saying "See this? Mitt Romney claiming the president would end welfare's work requirements? The New York Times calls it 'blatantly false'. The Washington Post says: 'the Obama administration is not removing the bill's work requirements at all.’"

Regardless of the pushback, it's apparent that the Romney campaign is continuing to attack the president over welfare, with both Romney and House Budget Chairman Paul Ryan of Wisconsin, his running mate, highlighting the welfare claims in their campaign speeches last week.

As is their practice, the Romney campaign would not reveal any details on where the new commercial will run or on the ad buy.