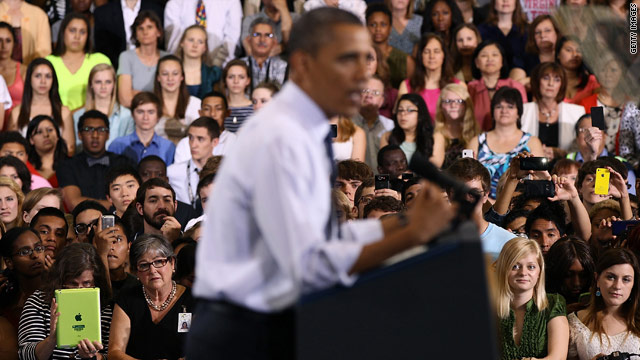 (CNN) - The presidential campaign of President Barack Obama, who is campaigning in Ohio Tuesday, released the following excerpts of his speech in Columbus.

Watch the event live at CNN.com/live.

"I am only standing before you today because of the chance my education gave me. So I can tell you with some experience that making higher education more affordable for our young people is something I've got a personal stake in. It's something I've made a top priority of my presidency. And Ohio, it's something that is very much at stake in this election.

"I say this because putting a college education within reach for working families doesn't seem to be a priority my opponent shares.

"A few months ago, just up the road in Westerville, Governor Romney said if you want to be successful, if you want to go to college or start a business, you can just "borrow money if you have to from your parents." And when a high school student in Youngstown asked him what he would do to make college more affordable for families like his, Governor Romney didn't say anything about grants or loan programs that have helped millions of students earn their education; nothing about work-study programs, or rising college tuition; not one word about community colleges, or how important higher education is to America's economic future. He said "the best thing I can do for you is to tell you to shop around."

"That's it – that's his plan. That's his answer for a young person hoping to go to college – shop around, borrow money from your parents if you have to – but if they don't have it, you're on your own.

"That's not an answer. There is nothing a parent wants more than to give our kids opportunities we never had. And there are few things as painful as not being able to do that. But right now, as we're still fighting our way back from the worst economic crisis in most of our lifetimes, many parents are struggling just to make ends meet. And I do not accept the notion that we should deny their children the opportunity of a higher education and a brighter future just because their families were hit hard by the recession."