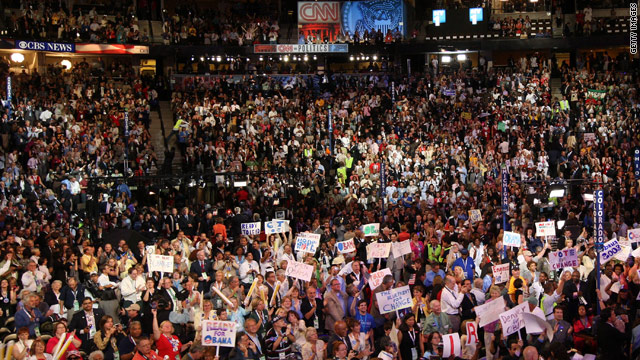 Playing off of Bill Clinton's "soccer mom," voting bloc in 1996, the then-Alaska governor called herself a “hockey mom.”

"You know the difference between a hockey mom and a pit bull?" she asked the crowd at the 2008 RNC. "Lipstick."

Barack Obama, then a little-known Illinois state senator, to the top tier of Democratic politics when he showed off his oratorical skills in this rousing speech that was aimed at divisive politics - Obama famously talked of one America uniting red and blue states, "...there is not a liberal America and a conservative America, there is a United States of America."

In 1988, Ann Richards, was Texas’ state treasurer and another Democratic rising star when lambasted George H.W. Bush, Reagan’s vice president who was running to replace him at the end of his second term.

Richards pointed to the privileged Bush’s lack of concern for everyday Americans - until he was running for office – and his gift for gaffes: "Poor George, he can't help it - he was born with a silver foot in his mouth."

Richards was later elected governor of Texas but was defeated in her bid for re-election by Bush’s son George W. Bush.

Although Bush, then Ronald Reagan’s vice president, was not new to the national stage, his speech the night he accepted the 1988 Republican nomination for president made history.

The line written by Peggy Noonan, "Read my lips, 'No new taxes,'" came back to haunt him in his re-election bid.

Two years after making his pledge, Bush raised taxes as a part of a budget agreement. His 1992 Democratic opponent, Bill Clinton, made hay of Bush’s miscalculation.

In running for president four years earlier, Ronald Reagan called the U.S. a “shining city on a hill.” But then-New York Gov. Mario Cuomo, who was viewed by Democrats as a rising star, disputed Reagan’s view of America.

As Reagan was running for re-election, Cuomo told delegates at the 1984 Democratic National Convention, “A shining city is perhaps all the president sees from a portico of the White House and the veranda of his ranch where everyone seems to be doing well. But there’s another city – there’s another part to the shining city….In this part of the city there are more poor than ever…there is despair…”

Mr. President, you ought to know, this nation is a tale of two cities…”