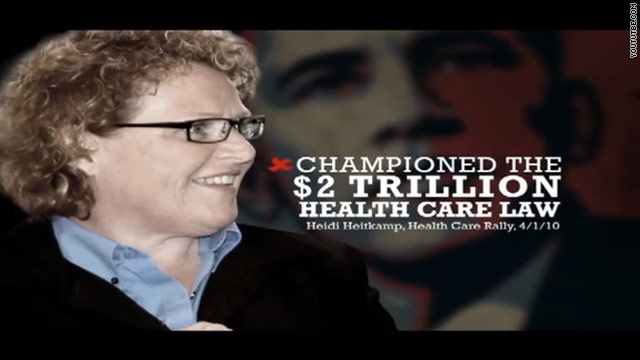 (CNN) - A conservative non-profit group is weighing in on races for the U.S. Senate in Nevada and North Dakota races with $635,000 in television advertising, the group said Wednesday.

"We fight for what's right, and take responsibility when we're wrong. But not Shelley Berkley, repeatedly accused of corruption," the narrator says in the Nevada ad, going on to reference a House Ethics Committee investigation opened in July.

In North Dakota, the ad says, "Our Senate candidates are both good people, but the choice is between their two visions." The spot criticizes Heitkamp for supporting President Barack Obama and his health reform law.

The spot includes a Republican criticism of that law: that it "took $700 billion from Medicare, putting millions of seniors at risk and our children in debt." As CNN has reported, the cuts are an estimated $716 billion in future growth of payments to health care providers under the program, designed to extend the program's solvency.

Previously this cycle, the American Future Fund announced plans to spend $3.4 million tying President Barack Obama to the financial industry and another $2 million on ads attacking Obama over the government's failed Solyndra investment.