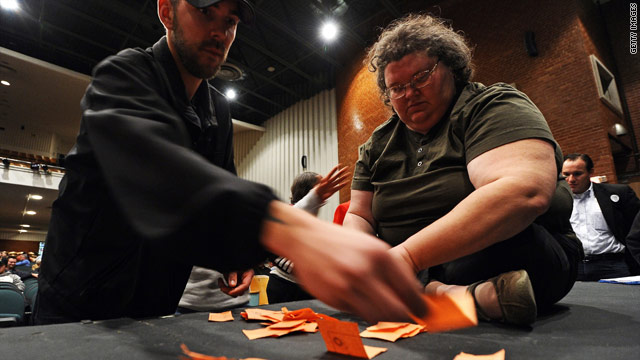 The effort to bring stability to a primary process that has been next to chaotic for two consecutive presidential cycles took place at a meeting of the RNC Rules Committee in Tampa, the site of next week's GOP Convention.

Florida's decision last year to leapfrog ahead of other states and hold their Republican primary in January made a mess of the nominating calendar and sparked months of GOP infighting over delegate counts and penalties.

The ostensible purpose of the new amendment is to protect the first four February "carve out" states on the Republican calendar: Iowa, New Hampshire, South Carolina and Nevada.

The rules committee had previously approved a measure protecting those four states from being penalized if they are forced to move up their primary dates to stay ahead of other rule-breaking states, as they did last winter.

But on Wednesday, the rules committee went a step further, approving a so-called "super penalty" that would strip offending primary states of all but nine delegates to the convention.

That means that just nine Republican delegates, instead of their usual 99, would be up for grabs in Florida in the next presidential cycle if the state blows up the calendar and holds a primary – vastly reducing Florida's influence on the nominating process.

"Nobody is going to spend money in Florida if you only get nine delegates," said Steve Duprey, a New Hampshire RNC member who backed the "super penalty" amendment.

Under current RNC rules – the rules governing next week's convention – states other than the first four "carve-outs" must hold their primaries after March 1, or have their delegations reduced by half.

The rule change must be voted on Thursday by a meeting of the full 168-member RNC.