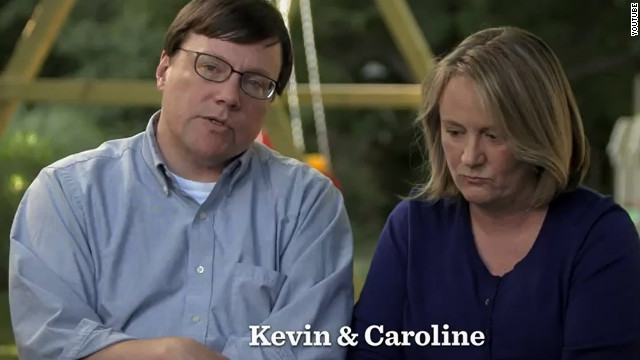 The ad, called "Children," will air in Ohio and Virginia on Thursday, the campaign said. Those states are key battlegrounds where Paul Ryan, the Wisconsin congressman running as Romney's vice presidential pick, has campaigned this week.

"Some of our children's greatest experiences have been in the smaller classrooms," an unidentified man says in the spot.

A narrator chimes in: "But Mitt Romney says class sizes don't matter and he supports Paul Ryan's budget which could cut education by 20%."

In May, Romney defended his position on class sizes in public schools at a roundtable with teachers in Philadelphia. Romney's plan emphasizes school choice over other factors, including efforts to reduce the number of students in classrooms.

Romney cited studies he said showed no correlation between classroom size and performance, naming schools in Cambridge, Massachusetts, as an example.

"The schools in the district with the smallest classroom sizes had students performing in the bottom 10%," Romney said. "Just getting smaller classrooms didn't seem to be the key."

In the Obama campaign ad released Wednesday, parents say Romney's position puts him at odds with what's best for kids.

"You can't do this by shoving 30, 35 people into a class and just teaching to some test," a man says.

"These are all issues that really he personally cannot relate to. To be able to afford an education, to want the very best public education system for your children," a woman adds.

A photo flashes of Romney arriving in Las Vegas with Donald Trump's airplane in the background – an image the Obama campaign has used previously when attempting to paint Romney as out of touch.

“President Obama’s latest ad puts him directly at odds with his own education secretary, who has promoted teacher quality – not class size – as the most important factor in a good education," Romney campaign spokeswoman Amanda Henneberg wrote in a statement. "President Obama and his campaign have put misleading and hypocritical attacks ahead of a real discussion about education policy. As president, Mitt Romney will pursue genuine education reform that puts parents and students ahead of special interests and gives every child a chance to succeed.”