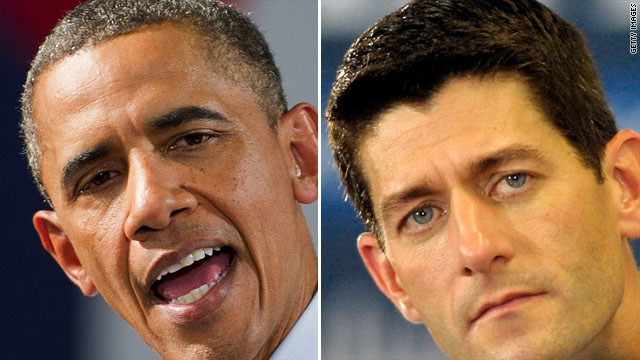 If Republicans and Democrats fail to come to a budget agreement by the end of the year, significant cuts to the Department of Defense could become a reality. Beginning in 2013, the federal government would undergo a series of budget reductions to defense and non-defense programs that would total $1.2 trillion in cuts over the next decade.

The policy came about after a congressional “super committee” failed to reach a deficit-reduction plan last year. Months earlier, Congress had voted to implement the cuts if the super committee didn’t ultimately find an agreement.

Critics point to the fact that the Wisconsin congressman—along with other House Republicans—voted for the original debt ceiling deal that put sequestration on the docket. Ryan on Tuesday defended his role in the process.

“We already passed spending cuts and other wasteful parts of government to replace those irresponsible and devastating cuts that the president, through his lack of leadership, is promising will occur,” he said. “When these budget negotiations went down the pike, the president insisted that these irresponsible defense cuts be a part of this package. Then he insisted if you want to undo them, we need a trillion dollar tax increase on successful small businesses.”

In May, Ryan co-authored an op-ed with Chairman of the House Armed Services Committee Rep. Buck McKeon opposing sequestration that was created under the Budget Control Act of 2011.

“This sequester was never intended to be policy. It was meant to be something both parties wished to avoid, in order to motivate members of the supercommittee to work together. Despite a good-faith effort to avoid the sequester, the supercommittee’s negotiations broke down over fundamental differences in visions for our nation’s future,” according to the op-ed published by Real Clear Politics.

Meanwhile, Obama has also called on Congress to find a way to reach a deficit-reduction deal and thus avoid sequestration. Both parties, however, disagree on how to shrink the budget shortfall. Republicans call for spending cuts and amending the tax code (though without raising taxes), while Democrats advocate a plan that would bring in more revenue through a tax hike on the very wealthy. The debate is shaping up to became an end-of-the-year showdown on Capitol Hill.

In West Chester, his second rally of the day in Pennsylvania, Ryan talked about what’s at stake if the cuts end up taking place.

“So you either lose defense jobs in Pennsylvania or put small businesses further in a competitive disadvantage to compete in the global economy and lose small business jobs. I’ve got a good idea – why don’t we take away President Obama’s job and create jobs for everybody no matter what industry they’re in,” Ryan said.

Ryan’s spokesman, Michael Steel, followed up the speech by pointing to the congressman’s controversial budget plan, which Steel said would “replace these crippling national security cuts.”

"Chairman Ryan voted for bipartisan deficit reduction, while President Obama insisted on these irresponsible cuts to our national defense,” Steel said. “Then the President went AWOL on the campaign trail, and Chairman Ryan wrote the bill to replace these crippling national security cuts with commonsense reforms. The president is entirely responsible for cuts that his own Secretary of Defense says will 'hollow out' our Armed Forces, and will cost hundreds of thousands of American jobs."

Following the speech, Obama’s campaign responded to the remarks.

"Congressman Ryan voted for and praised the Budget Control Act. Instead of making misleading attacks on the president, he should tell his fellow Congressional Republicans and Mitt Romney to drop their refusal to ask for a single penny from millionaires and billionaires, and work with the president to achieve balanced deficit reduction to avoid these cuts he voted for and is now using to score a political point," Obama campaign spokesman Danny Kanner said in a statement.