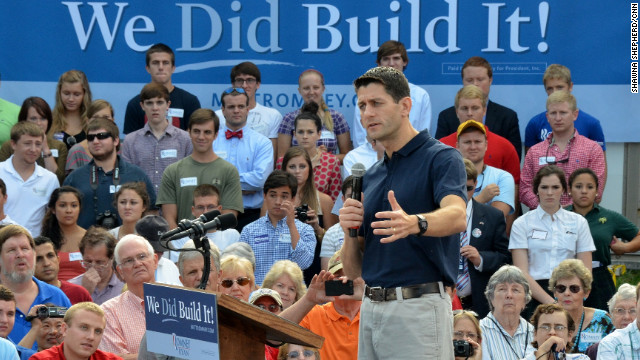 Roanoke, Virginia (CNN) – Paul Ryan on Wednesday visited the Southwest Virginia town where President Barack Obama made his "you didn't build that" remark that has since been seized upon by Republicans, including Mitt Romney's campaign, and has become a major theme of the presidential race.

The local small business owner who introduced the vice presidential candidate at an outdoor morning rally underscored that point. According to Chris McMurray, owner of Crumb and Get It Cookie Co. in nearby Radford, he turned down an invitation from the Obama campaign for Vice President Joe Biden to appear at his bakery last week.

"I caught a little attention for telling the vice president that though I respect him very much, I would not like to be used as a photo op for his campaign. Nothing personal, but I just happen to disagree with the president and the vice president on a few things," McMurray said.

Ryan, dressed in a blue polo shirt, khakis and cowboy boots, bounced off McMurray's comments to highlight his running mate's business background as an example that Romney knows how to improve the economy.

"[Obama] said last summer was going to be the summer of recovery. It's a summer later and it's still worse. He said that the private sector is doing just fine, we need more government. This is President Obama's imaginary recovery. It's not here."

He added, "We have a mountain of uncertainty that's plaguing small businesses and we have a person in Mitt Romney who knows through experience the challenge that businesses face, how job creation works, that the engine of opportunity, the nucleus of our economy is not the government, but the successful small business, the entrepreneurs, the people of this country."

The dueling presidential candidates and their campaigns dispute each other's interpretation of the president's unscripted comment about business at the rally in Roanoke last month.

That hasn't stopped the Romney campaign from continuing to build on the narrative that Obama is "out of touch" with small businesses.

Paul never uttered "You didn't build it" at the event but the words were emblazoned on a huge sign next to the seven-term congressman and House Budget Committee chairman and he has been pushing the campaign's message at rallies in battleground states since he joined the ticket on August 11.