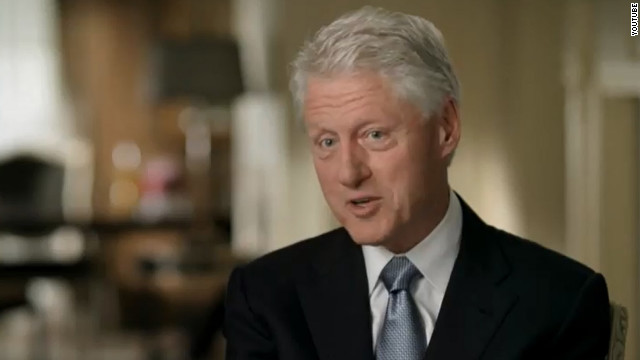 The former president, who’s been a top surrogate for Obama this year, largely praises Obama in the spot and attempts to draw a contrast between Republicans and Democrats this election year.

"This is a clear choice. The Republican plan is to cut more taxes on upper income people and go back to deregulation. That's what got us in trouble in the first place,” Clinton says in the ad. "President Obama has a plan to rebuild America from the ground up, investing in innovation, education, and job training. It only works if there is a strong middle class."

He later adds: "That's what happened when I was President. We need to keep going with his plan."

Responding to the ad, Romney's campaign pointed to the Republican candidate's plan to spur economic growth.

Her statement referred to Clinton's praise of Romney's corporate experience, when he said on CNN's "Piers Morgan Tonight" in May that Romney had a "sterling business career" as CEO of Bain Capital. Clinton faced strong criticism from Democrats who had been using Romney's corporate history as an attack line.

In his stump speeches, Obama frequently credits Clinton-era policies for the strong economy in the '90s, arguing the country fared well under Clinton because he "understood what it takes for this economy."

"Nobody has a better grasp and understanding of the issues than this man," Obama said at a June fundraiser in New York.

Clinton was used in another political ad recently, though much to his chagrin.

Mitt Romney’s team featured the former president positively in a recent spot that attacks Obama for “gutting” the work requirement in the welfare reform law signed off by Clinton in 1996. The ad was part of a weeks-long campaign by Team Romney that leveled charges at Obama over his administration’s welfare adjustments.

However, Clinton himself, as well as fact-check groups and several news outlets, including CNN, have all said the Romney claim that Obama ended the work requirement is untrue.

Clinton had a staring role in an Obama campaign video in late April, with the former president praising the current president's role in last year's military raid that killed Osama Bin Laden.

Clinton, who was set to headline a pro-Obama super PAC event this month, will further cement his role as a major player in this year's election when he delivers a prime time speech at the Democratic National Convention in September.

The former president also joined Obama at an April fundraiser in Virginia.