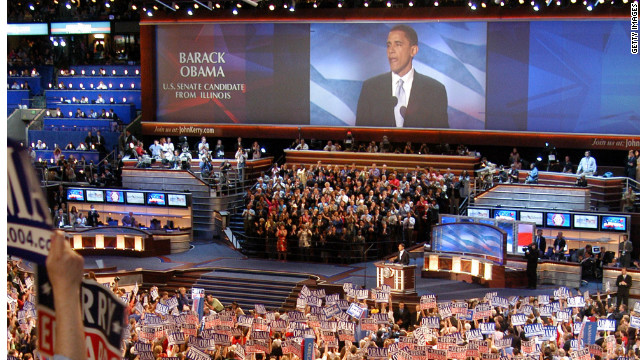 With the Democratic convention following the GOP gathering one week later in Charlotte, North Carolina, the Obama campaign feels confident the attention surrounding their convention will halt any momentum Romney may gain as the new nominee.

"Whatever there is, I think we can blunt that pretty quickly," one official said Thursday while speaking with reporters at CNN.

Former President Bill Clinton will give the nominating address to Obama on the final night of the convention, a move that had some critics questioning whether the 42nd president–who now has higher approval ratings than the current occupant of the Oval office–would overshadow Obama.

The campaign said they had no concerns of Clinton outshining the president. A top surrogate for Obama this year, Clinton starred in a new television ad released Thursday for the re-election campaign. In the spot, Clinton compares his economic policies to that of Obama, saying "We need to keep going with his plan."

Explaining their decision to highlight Clinton, a campaign official said they're not trying to use him as a reminder of "the good ol' days," but as a "validator" of their own policies.

"He's a great validator of what we want. He's viewed as an expert on how to move the economy forward and how to build it from the middle class out," one official said. "There are few people who can speak to that authoritatively, and he's one of them–because he's done it. He's sat in the chair."

First lady Michelle Obama will also have a headlining role at the convention, as she's set to speak on opening night, Sept. 4. Campaign officials said the first lady helps augment the campaign's strategy to use the convention as a way to show "what drives (the president) every day."

"What we really want to spend some time doing is talking about how he makes his decisions, how he understands the middle class, how he gets that, what drives him every day," an official said. "And we think that Mrs. Obama has a great point of view on that."

The campaign also dispelled rumors that the president's two daughters will be speaking about their father on stage, saying the girls will appear the final night but will be in school the rest of the week.

With North Carolina as a crucial battleground state this cycle –Obama narrowly won the state in 2008– the campaign said they expect the convention to make big returns for the president at the polls this November. They said the location of the site was a "statement on the fact that the president expanded the map of traditional Democratic territory in 2008."

They credited last cycle's gathering in Denver as a big factor in Obama's victory in a typically red state for presidential elections.

"The campaign really did an incredible job four years ago leveraging the convention to help win Colorado, and we're going to apply all those lessons and skills to this one," one official said.

During a briefing earlier in the day with reporters, the campaign also weighed in on some of the religious aspects of the DNC. The convention will feature an invocation and a benediction every night, with chosen speakers to represent a large portion of the Democratic base.

An official said one speaker will be a high-ranking member of the Catholic Church but did not disclose the name.

"I can't announce it because the person hasn't gotten their plane ticket but I think they're going to do it," the official said.

The campaign also took the time to contrast the two upcoming conventions. While the platform at the DNC will "look and sound like America," distractions will be on full display at the RNC, they said. One official pointed specifically to a tent featuring former Republican presidential candidates Herman Cain and Rep. Michele Bachmann of Minnesota.

The best outcome for the RNC, they said, is for the party to "survive the week because of the side shows."

As for reports that the Romney campaign has called in consultants to help repackage and reintroduce their candidate to the American public at their convention, one campaign official expressed skepticism that efforts to redefine someone who's been so well-covered will be successful.

"I think it's a doubtful proposition that the new dog food will sell any better than the old dog food," the official said.