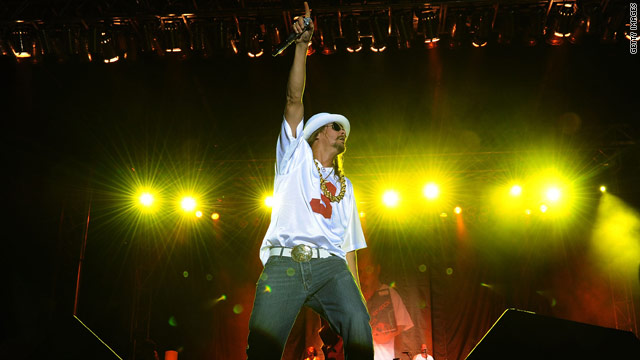 Pontiac, Michigan (CNN) - Kid Rock's presence on the campaign trail was felt long before he appeared with Mitt Romney's running mate Rep. Paul Ryan at a fundraiser on Friday.

Just ask any campaign staffer or political reporter on the trail. His song "Born Free" has blasted from speakers at rallies since Romney launched his presidential bid more than a year ago, and it has been playing at Ryan events since he joined the Republican ticket.

Wearing a white fedora, the musician introduced Ryan at a fundraiser in Kid Rock's home state of Michigan, at the lavish Oakland Hills Country Club in Bloomfield Township where Mitt Romney's family moved in 1953.

"I was going to come out, be a little weishenheimer, and say guess which one is running for vice president and then they would introduce Paul and I would walk out and say hello," said Kid Rock, whose real name is Robert James Ritchie.

The 42-year-old vice presidential hopeful played off that joke and displayed his Kid Rock knowledge referencing a song from the album Devil Without a Cause.

"So one of us is running for vice president, but only one of us listened to Bawitdaba on the way over here in the motorcade with the Secret Service," said Paul. "I've been listening to Kid Rock for a long, long time and I am older than him, just to set the record straight."

Ryan praised the rock star's success and said the Republican ticket wants to promote peoples' success, not resent it.

"Look at this creator right here," Paul said about Kid Rock. "The fruit of his labor coming from his mind, his talents. He took his path to find his happiness and he is realizing his dreams and he is paving his way. Only in America can you do this. That is what this country is all about."

Kid Rock previously appeared - and performed - at a rally for Romney in Michigan last February.