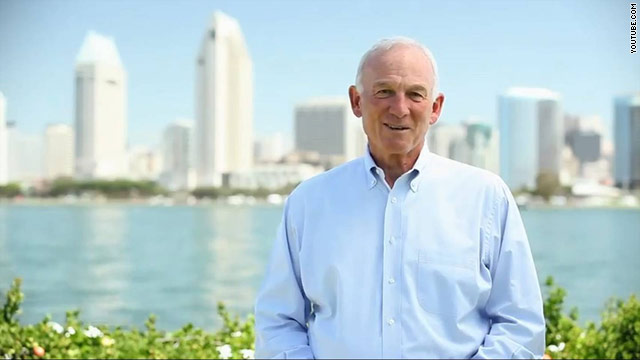 (CNN) – The Republican mayor of San Diego has announced plans to air an ad advocating for same-sex marriage rights during next week's Republican National Convention in Tampa.

The spot, titled "Family and Freedom," comes after the Republican Party developed its official plank on gay marriage, which pushes for a federal constitutional amendment banning same-sex couples from marriage. The platform is expected to be officially confirmed at the convention next week.

The Human Rights Campaign and Freedom to Marry said they will run the spot from Monday through Thursday next week in a $30,000 television ad buy in the Tampa area market.

In the ad, Mayor Jerry Sanders speaks directly to the camera encouraging Republicans to support his stance on marriage equality while touting his conservative view of limited government.

"In 2007 I announced my support for marriage quality for two reasons: family and freedom," said Sanders in the ad. "Marriage strengthens families and we need more of that in this country, not less."

Sanders lists prominent Republicans, like Dick and Lynne Cheney, Laura Bush and Cindy McCain, who have announced their support of same-sex marriage.

The California mayor's push for a change in GOP language on same-sex marriage is not the first call for the party to adopt more liberal stances on social issues following the Republican committee's development of the party's official platform.

Sen. Scott Brown, who is defending his Senate seat in the deep blue state of Massachusetts, sent a letter to Republican National Committee chairman Reince Priebus earlier this week urging him to reconsider the Republican stance on abortion rights.

"Republicans talk about values such as freedom, limited government, and personal responsibility, values that support the freedom to marry," said Evan Wolfson, founder and President of Freedom to Marry. "Our ad showcases Republicans who are living up to the values they proclaim, pointing the way for the party to get with the majority of Americans and on the right side of history."

While President Barack Obama came out in support of same-sex couples' marriage rights in May, Romney has said that marriage should remain between a man and a woman though states should have the ability to extend some rights to gay couples, short of marriage.