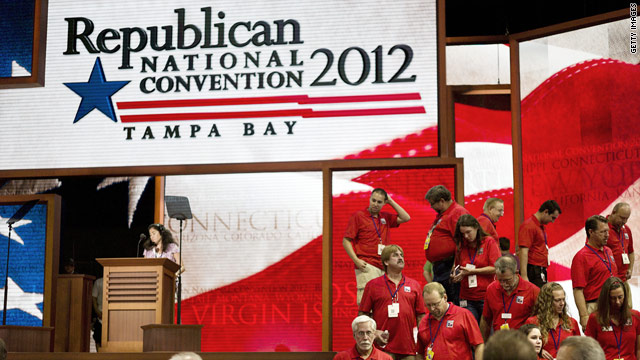 Tampa, Florida (CNN) - In a move backed by Mitt Romney advisers, Republicans just made it harder for grassroots activists to undermine the outcome of primaries and caucuses at state conventions.

The rules change, approved Friday by Republican National Committee officials in Tampa, was an implicit response to efforts by Ron Paul supporters to secure delegates at GOP state conventions and overturn the results of various primaries and caucuses.

The amendment to party bylaws was proposed by Romney attorney Ben Ginsberg, a delegate from the District of Columbia.

Ginsberg said the rule change would fix "what we saw as a damaging flaw in the presidential selection and election process and wish to correct for 2016."

The flaw: Even after votes were counted on primary or caucus night throughout the winter and spring, a candidate – Romney, for instance – was not guaranteed to pick up the corresponding number of delegates to send to the national convention.

In some cases, as in Nevada or Iowa, a statewide caucus victory did not guarantee bound delegates to the convention. That left an opportunity later in the summer at state GOP meetings for supporters of Paul to pack convention delegations with their dedicated allies.

The new rule, adopted by a 56-40 vote, would allow each campaign to select their delegates to the national convention, instead of waiting for the process to unfold at state convention level.

The rule would only apply to statewide votes and not to states like Michigan, where primary delegates are allocated by congressional district.

"The candidate who wins the actual statewide vote gets their supporters as delegates," Ginsberg said in arguing for the rules change.

Supporters called the rule "common sense." Opponents said it would hamstring states from determining how their own party rules.

An official from the RNC said the new rule made it so campaigns would not have to return to a state like Iowa, months after the caucuses ended, to whip up votes at a state convention to protect their delegates.

"If you win the state once during the primary process, you won the state," the official said. "You don't have to go back and win it again for delegate seats."