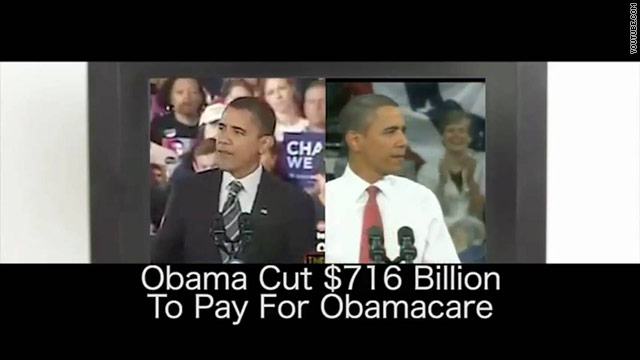 (CNN) - A television advertisement released by Mitt Romney's presidential campaign on the eve of the GOP convention is the fifth in the past two weeks focused on Medicare, the health care entitlement program for seniors.

President Barack Obama and Romney have sparred over their plans for the program in a series of ads - primarily from the Republican challenger - and on the campaign trail.

Like the other spots, this ad includes a claim that, "As president, Barack Obama cut $700 billion from Medicare to pay for Obamacare."

The claim cites a report from the Congressional Budget Office that shows repeal of the president's health care law would mean an additional $716 billion in spending on the program.

Romney and other Republicans have argued that the health reform law therefore cut $716 billion from Medicare.

The figure is estimated savings in payments to providers over the next decade - a reduction in the program's estimated growth.

After a previous Romney ad raised the claim, an Obama campaign spokeswoman said the president "achieved $716 billion in savings by cracking down on fraud and needless payments to insurance companies."

Romney's new ad also uses video and sound of Obama on the campaign trail in 2008.

"Senator McCain would pay for part of his plan by making drastic cuts in Medicare - $882 billion worth," Obama is seen saying.

After the ad's narrator and on-screen text levels the $716 billion claim, Obama is seen continuing his remarks at the 2008 campaign event.

The Romney campaign did not say in which markets the 30 second ad would run nor how much the campaign was spending on it.

- CNN's Ashley Killough and Kevin Liptak contributed to this report