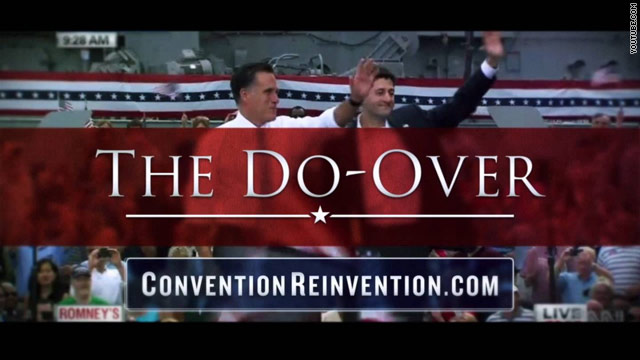 "On August 30, Mitt Romney stars in 'The Do-Over,’" the video’s narrator says.

The web video features footage of the presumptive GOP presidential nominee on the campaign trail this cycle, including clips of some of his gaffes and controversial statements.

The video comes one day before the Republican National Convention convenes in Tampa, Florida. Due to weather conditions from Tropical Storm Isaac, however, the convention's speeches and events won't begin until Tuesday afternoon.

In a statement accompanying the video, the Obama campaign said it is "presenting Americans with an epic cinematic preview of Mitt Romney's 'convention re-invention' - the Do-Over moment that voters have grown to expect - because they've seen this movie before."

The elaborately produced video states that "Mitt Romney faces unfavorability ratings through the roof" and despite hiring "Hollywood producers and Madison Avenue mad men to reinvent himself ... nothing is working.”

The ad ends with the imaginary movie's rating: "Rated 'N' for 'Not gonna work.’"

Republican National Committee Chairman Reince Priebus argued Sunday morning the convention would be an opportunity to present a more optimistic perspective on Romney and let voters get to know the candidate.

On CNN's "State of the Union," Priebus said the convention will be sharing "the story about a man that is decent, honorable and gave away his father's inheritance and started something from nothing."

Priebus said the convention will highlight the "great business" that Romney started, referring to the private equity firm Bain Capital, as well as his tenure leading the 2002 Winter Olympic Games in Salt Lake City.

"We need somebody to fix the economy and Mitt Romney is the one who can do it, but it is part of what a convention is all about," Priebus told CNN Chief Political Correspondent Candy Crowley.

Responding to the video, Romney's campaign said Sunday the president was relying on "negative attacks" as a way to distract from his own record.

"President Obama continues to prove he has little he can say about his indefensible record in office, which has led to chronic unemployment, increased poverty, falling incomes and middle-class pain. With public confidence in the President falling, his campaign will continue to rely on negative attacks that will be rejected by the American people," Romney spokeswoman Amanda Henneberg said in a statement.