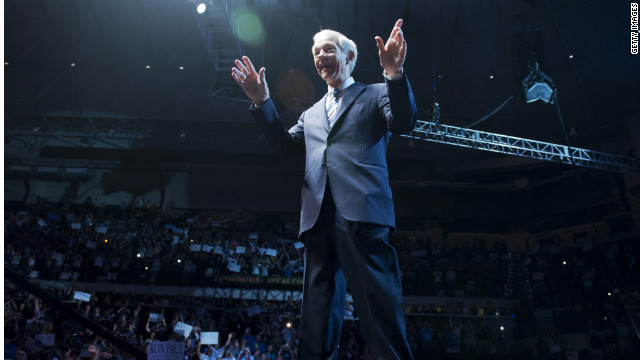 "I'm convinced that we're living at the end of an era," Paul told the crowd at a rally in honor of him and his libertarian political movement. "The end of an era provides an opportunity," Paul added before laying out his view that an era in American government, foreign policy, and monetary policy that began in 1913 is coming to an end roughly a century later.

After striking the familiar chords of the libertarian themes that have pervaded his two presidential bids in the last five years, Paul told the gathering that after a century of failed policies capped by the recent financial crisis and still struggling economy, a new era is starting.

"So how do we look at today? 2012?" Paul said. "We're living in a new era," he added. "We're going to start something different - completely different."

"It can happen that we can reverse this," Paul said near the end of his hour long speech that was received enthusiastically by attendees. "We can turn it around."

After warning about the threats he sees from fascism and the power of large corporations in American society, Paul urged his followers to continue to carry his libertarian banner forward beyond this year's upcoming election.

"I think every one of us has a responsibility because people in an audience like this know and understand the problem," Paul said. Then, the Texas lawmaker paid a compliment to his notoriously loyal grassroots.

"You have more insight than essentially almost everybody in Washington. But the difficult task is you have more responsibility."

Paul told supporters to study issues relating to personal liberty, property rights, foreign policy and monetary policy and that an opportunity to share that knowledge will come.

"You don't have to worry about what your job's going to be. You know the answers and you speak out and you're available, somebody will use you," he said.

"And it may be in politics, you may run for office, you may organize, who knows what it will be."

Paul was the final speaker at a four-hour long rally held a day before the Republican convention was originally scheduled to begin.

The event was, in many respects, a counter-convention designed to celebrate Paul as the driving force behind what his supporters have dubbed "the liberty movement." The event also served to rally those loyal to Paul's movement, as his own political career is coming to an end with his planned retirement from Congress early next year and amid questions from political observers about the movement's future.

"We're here to fight for our liberty and our freedoms as a country," 47-year-old Todd Ellis of Little Rock, Arkansas told CNN before Paul spoke. Ellis, who is in Tampa as a Paul delegate to the GOP convention said the focus back in his state is on local "liberty candidates" who can eventually get to higher offices. Greta Gay, Ellis' companion, was also impressed with Ashley Ryan, an RNC committeewoman from Maine and Paul supporter, who gave a rousing speech earlier in the program. "She's one to watch. She's a little powerhouse," Gay said.

Rep. Justin Amash of Michigan also spoke to the gathering, saying it was "awesome" to work alongside Paul in the halls and hearing rooms of Congress.

For 29-year-old Cory Soulier, a Paul supporter from Connecticut, Amash is exactly the kind of elected official who can keep Paul's movement alive. "I have a lot of high hopes for him," Soulier said of Amash, "I feel he could carry the torch of liberty."

Sen. Rand Paul - Paul's son and the most obvious candidate to carry the torch of his father's movement - was also given the seal of approval by the thousands of his father's grassroots supporters at the rally. As the junior Paul took to the stage to introduce his father, he was greeted was repeated chants of "Paul '16! Paul '16! Paul '16!" - an apparent reference to the next presidential race.