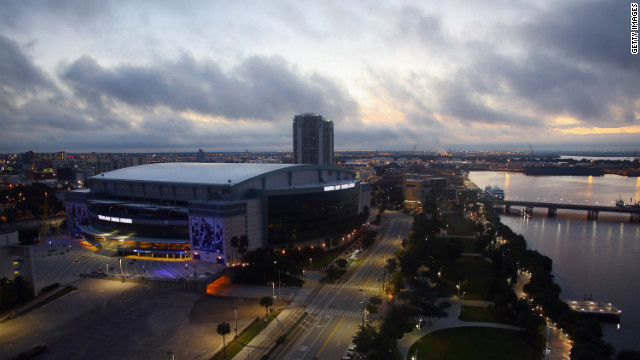 BREAKING: EERIE SIMILARITIES: ISAAC FOLLOWS TRACK OF KATRINA, EVACUATIONS ORDERED FOR GULF COAST… Thousands in Louisiana, Mississippi and Alabama were being told early Monday to leave their Gulf Coast homes ahead of the arrival of Tropical Storm Isaac as forecasters warned it was gaining strength as it followed the same path Hurricane Katrina took seven years earlier.

The tropical storm was expected to make landfall late Tuesday or Wednesday, Katrina's anniversary, as a Category 2 hurricane with winds of at least 96 mph.

Everyone in Tampa is talking about the weather. Instead of talking about Mitt and Ann Romney, Paul Ryan, Chris Christie and Marco Rubio, everyone at the Republican National Convention is talking about confiscated umbrellas, delayed flights and rain ponchos.

Adding to the intrigue as the forecast for Tampa improves is the discussion du jour, "did Republicans overreact and cancel Monday's convention too soon?" This new angle we find ridiculous as public safety always trumps politics - and indeed is a powerful part of politics.

Yet, this is depressing for the two of us who eagerly await these conventions, where for one brief period in our lives, we are surrounded by people who enjoy talking about politics as much as we do.

This discourse shift among the most engaged political fanatics underscores the bigger blow to the Republican ticket.

At a time when the campaign had planned to re-introduce their candidate, with exactly one month until the first votes are cast in Iowa early voting, the loss of four days-worth of news cycles is a big blow.

The bookings and headlines from the Sunday shows revealed the awkward turn from Mitt Romney to weather crisis management. Dana Bash reports that even Ohio's state Republican delegation started using its political text alert system to give weather updates.

Not to be swayed, we at the CNN Grill in Tampa are talking about Gloria Borger's amazing interviews with Ann, Tagg and Mitt Romney - especially regarding Ann's diagnosis with multiple sclerosis, and how her husband helped her cope.

In two minutes you will see a different side of Mitt Romney, one that is being overshadowed right now by a hurricane.

You are reading a sneak peek of CNN's Political Gut Check. If you would like to receive it in your Inbox every day, send an email to gutcheck@cnn.com.

Leading CNNPolitics: First on CNN: Sheldon and Miriam Adelson coming to Republican Convention
Nevada billionaire and Republican donor Sheldon Adelson and his wife, Miriam, are getting ready to create more political buzz. They have decided to attend this week’s Republican convention, CNN has learned. The couple will take in much of the convention activity and are expected to listen to many of the speeches, especially ones by Mitt and Ann Romney. – Kevin Bohn

Leading Drudge: Isaac 'Could Rival Hurricane Katrina'
On August 24th, we warned on Forbes that Tropical Storm Isaac could pose a threat to energy markets and even rival Hurricane Katrina in its destructive power (Could Tropical Storm Isaac Turn Into Another Katrina?). While the computer models are still showing a substantial spread in solutions, it appears more likely that Isaac will make landfall somewhere near the Louisiana, Mississippi Gulf Coast. This track will provide the storm more time to intensify over the very warm water of the Gulf of Mexico. – Michael Barak, Joseph Bastardi and Alan Lammey

Leading HuffPo: Mitt Romney Reaped Huge Tax Benefits Based On 'Active' Role At Bain Capital
Mitt Romney has repeatedly insisted during the presidential campaign that layoffs and other controversy surrounding Bain Capital companies for the past decade are not his responsibility, because he retired in 1999. When tax experts charged that he benefited from legally dubious tax avoidance strategies employed by Bain, his campaign noted that the investments are kept in a blind trust completely out of his control. – Zach Carter, Ryan Grim and Jason Cherkis

Leading Politico: Mitt Romney outlines governing plan
Mitt Romney conceded President Barack Obama has succeeded in making him a less likable person, but he offered a defiant retort to those hoping he will open up this week: “I am who I am.” Jim Vandehei and Mike Allen

Leading The New York Times: A Party of Factions Gathers, Seeking Consensus
Mitt Romney arrives here this week to accept his nomination from the increasingly disparate coalition of factions known as the Republican Party, confronting the challenge of unifying them behind him and — should he win — exerting his own authority over a party that is in many ways still forging a post-Bush identity. – Adam Nagourney

Wayne Slater (@WayneSlater)
Delegates wake to steady rain in Tampa, the edge of Isaac. Batten down the hatches on storm-tossed Day One

Rick Klein ‏(@rickklein)
Official #2012rnc lighting brought to you by Bed Bath and Beyond? http://pic.twitter.com/df2HDTVM

Nate Silver (@fivethirtyeight)
People forget how bad Ray Nagin screwed up by not evacuating New Orleans sooner in '05. Yet somehow he was re-elected. http://vnty.fr/NqWr2V

The 1880 Republican convention took the most ballots to determine a nominee. Who was nominated and how many ballots did it take?