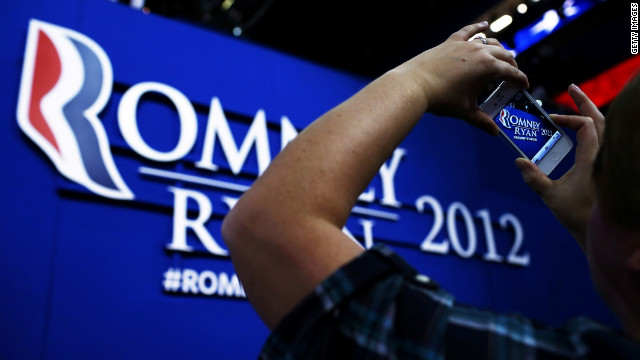 (CNN) - The election of 2012 may well be the first truly social election in U.S. political history with voters' voices heard across the internet well before they enter the voting booth. As a result, the national conversation will play a bigger role than ever in the way news organizations such as CNN cover the story.

With the kick off this week of the Republican National Convention in Tampa, Florida and next week's Democratic National Convention, CNN presents its social take on the conventions. Consider the following guide an open invitation to participate in the way we cover the events of the next two weeks and the entire general election season to follow.

Facebook
This year, we're taking a very close look at what voters are saying by teaming up with Facebook for a few big projects:

* The "I'm Voting" app invites you to declare that you're voting and share your position on the biggest election issues with CNN and your Facebook friends. Look for new questions off the news every few days until November.
* The Facebook-CNN "Election Insights" looks at the Facebook conversation around candidates by gender, age and location over time.
* CNN's home for all things politics is the CNN Politics page on Facebook, where you'll see the latest data from our app, breaking news and conversation, and lists of CNN anchors whose scoops you can follow on Facebook.

iReport
CNN is sending three citizen journalists to each political convention - Alex Anderson, Elizabeth Lauten and Matt Sky to the RNC and Omekongo Dibinga, Melissa Fazli and Willie Harris to the DNC. They will be collecting sights and sounds from the convention floor and reactions to the speeches and events from the nation at home. Post your own iReports here for the RNC and here for the DNC. We'll be publishing the best from each convention into the multimedia gallery and interactive map layout we call Open Story.

Twitter
CNN is sending a small army of correspondents and reporters to each convention. Follow along with our boots-on-the-ground lists for the RNC (and DNC coming soon), and watch with us using the hashtag #cnnelections. Our main hub for all things politics will be @cnnpolitics, and @politicalticker will be the place to get every single one of the latest headlines the moment we have it.

Live blog
We invite you to watch the big events and speeches together with CNN's team of political experts and analysts, many of whom will be contributing to our live blog. All day long you'll find the very latest news developments and observations reported by our team at the Political Ticker, and then utilize it as a companion to CNN's live television coverage each night from 7 to 11 p.m. ET for extra information, trivia, social media reaction and more. You can join the conversation at cnn.com/ConventionsLive, or by tweeting with the hashtag #cnnelections.

Instagram
So much of the political conventions is pure theater – visuals, messages, hats – and that means an abundance of photo ops from behind the scenes. Many of the CNN shows and correspondents will post updates of their most photogenic moments on Instagram. Follow these accounts to see how the events come together behind the scenes: @cnnireport, @cnnpolitics, @cnnsitroom, @jimacostaCNN, @peterhambyCNN, @shepherdCNN, @laurambernardini, @johnkingCNN, @pierstonight, @andersoncooper and @cnnpr.

GetGlue
Use the GetGlue app to check in while you watch CNN's special television coverage of the 2012 conventions and unlock special GetGlue stickers.

FourSquare
On the ground in Tampa and Charlotte, CNN will be broadcasting live from the CNN Grill and serving up burgers to convention-goers (and the reporters who follow them). Check in on Foursquare for specials. Also, if you like CNN on Foursquare, you'll get tips from our producers and correspondents on good eats and political news around Tampa and Charlotte.