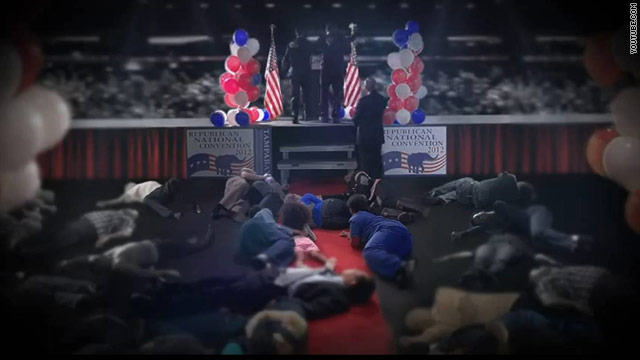 (CNN) – Coinciding with the Republican National Convention, MoveOn.org's political wing released a new television ad Monday to air in the Tampa media market attacking Mitt Romney for what the group claims is his focus on the rich.

The 30-second spot titled "Stepping on the Middle Class," features presumptive GOP presidential nominee and vice presidential candidate Paul Ryan look-alikes preparing to accept the Republican Party's nominations. As the duo crosses the stage, they literally step on people dressed as typical middle-class Americans – fire fighters, students, seniors and children – lying on the convention floor. The ad concludes with Romney and Ryan, accepting the nomination for "president and vice president of the 1%."

The Republican National Convention, scheduled to run Monday through Thursday of this week in Tampa was delayed by a day due to the on-slot of tropical storm Isaac, will compete with a barrage of attacks from Democratic and other pro-Obama groups hoping to diminish the Republican's time in the national spot light.

"The ad is aimed at conveying to voters how Romney and Ryan would raid the middle class to transfer wealth to the top 1%," the group wrote in a release about the ad buy. "The Romney-Ryan budget would hike middle class taxes to pay for more tax cuts for the rich and would end Medicare and replace it with a voucher program."

The liberal group also ran an ad in August using Romney's wife's dressage horse, Rafalca, who competed in the London Olympics, to hammer the presumptive GOP nominee for what the ad said is a $77,000 per year price tag for the horse's upkeep.

The group also went on the attack to counter a Romney bus tour in June. MoveOn.org sent out an SUV with a dog strapped to the roof, to tail the GOP contender in New Hampshire – a jab at a story Romney told about the family dog Seamus and his notorious ride in his dog carrier on the roof of the family's station wagon on a Romney family trip to Canada.