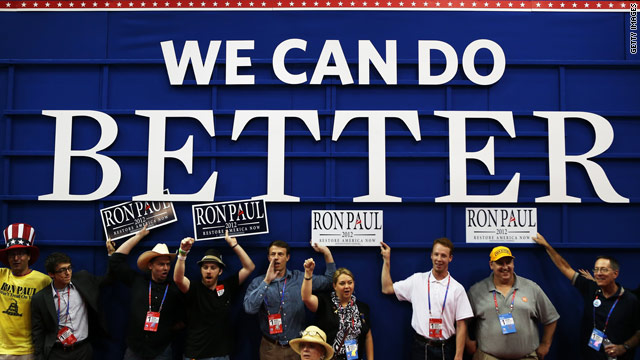 Paul loyalists say 'we can do better'

Tampa, Florida (CNN) - A small but enthusiastic group of Ron Paul supporters Monday gave an early indication of the presence they hope to have at this week's Republican convention.

After the gavel closed a shortened session Monday afternoon, two dozen supporters of the Texas congressman congregated under a large sign on the convention floor reading "We can do better."

While the banner, hung by convention organizers, was a criticism of President Barack Obama, the Paul supporters were tweaking the message.

Standing below it, the crew held their own signs from the former 2012 presidential candidate's failed bid, suggesting a tweak at the GOP establishment: that the party would be better off with Paul than Mitt Romney as its presidential nominee.

One convention official told CNN that organizers are not overly concerned about disruptions from Paul's loyal band, noting that the group, which chanted briefly by the sign, was dwarfed by the thousands of Romney supporters who will fill the hall this week. The RNC announced plans to run a video tribute to Paul at the convention.

Besides, the official asked, what would a political convention be without at least some dissent.