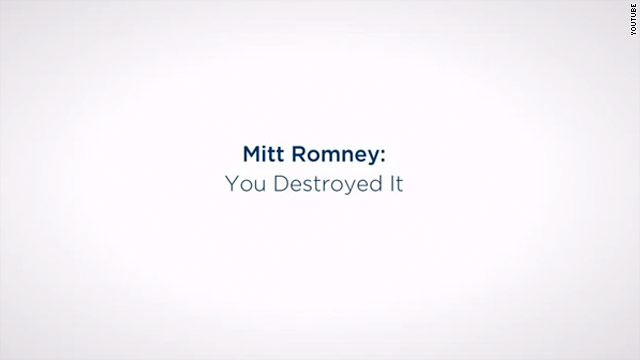 Tampa, Florida (CNN) - Democrats continued blasting Mitt Romney, as well as other speakers at the Republican National Convention, on Tuesday as the Republican presidential candidate made his way to Tampa for his official nomination.

The Democratic National Committee spliced together clips of news reports on businesses closed by Bain Capital, the private equity firm Romney headed in the 1990s. The video ends with a tough rebuke on a now-frequent attack line from Republicans: "Mitt Romney: You didn't build that, you destroyed it."

That's a response to an ongoing assault by Republicans on a remark Obama made in July at a campaign event in Virginia, when he told a crowd that small businesses owe part of their success on government-provided services like roads and schools.

The "You didn't build that" portion of Obama's remarks has become a rallying cry for Republicans, who say it's indicative of economic policies they say hurt small businesses. The video Tuesday from the Democrats marks one of the first instances of Obama's team attempting to turn the remark back on their rival by using his time at Bain.

A second video Tuesday, from the liberal group American Bridge, uses archival clips of scheduled speakers at the Republican National Convention criticizing Romney. Sen. John McCain, Mike Huckabee, Chris Christie and Tim Pawlenty are all shown trashing Romney during previous contests, including during the Republican primaries from earlier this year. The video ends with the sarcastic tagline "With friends like these, who needs American Bridge?"

Romney himself has used clips in television ads of Democrats blasting Obama during earlier contests, including using tough lines from Hillary Clinton, who ran an often-bitter contest against Obama during the 2008 Democratic primary.