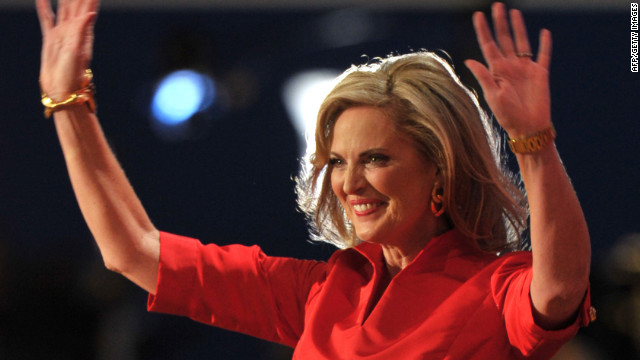 "His name is Mitt Romney and you really should get to know him," Ann Romney said in her primetime convention speech.
August 29th, 2012
08:00 AM ET

BREAKING: ALL EYES ON ISAAC… With officials reporting "overtopping of a levee on the east bank" from Braithwaite to White Ditch in Louisiana's Plaquemines Parish, Billy Nungesser, president of the parish, tells CNN there have been reports of 10 to 12 feet of water in homes in the area. The slow moving storm made second landfall in Southeast Louisiana around 4:00 a.m. this morning and continues to lash the Gulf Coast with strong winds and consistent rain.

After Mitt Romney secured the Republican presidential nomination on Tuesday, his wife Ann Romney made a direct pitch to married women with their love story. Later New Jersey Gov. Chris Christie threw out the red meat with his tough love message. Here are five things we are looking for during the Republican National Convention on Wednesday.

1. More Energy. It is Paul Ryan's night, and the charismatic vice presidential nominee has to rally the Republican base and shake off the convention's delayed start and subdued first night.

2. More differentiation with President Obama. In 2008 Arizona Sen. John McCain left it to his vice presidential nominee Sarah Palin to skewer then-Sen. Barack Obama (Who could forget the line: "This is a man who has authored two memoirs but not a single major law or reform – not even in the state Senate"?). Will Ryan do that in a way that New Jersey Gov. Chris Christie did not?

3. The down ballot effect of having Ryan on the ticket. As soon as the Wisconsin congressman was announced as Romney’s running mate, Democrats saddled every Republican running for office with the "Ryan budget." Will there be any griping?

4. The bench. New Mexico Gov. Susana Martinez's speech will be one to watch. She is a compelling speaker with a captivating life story - one that she weaves into her own narrative of the Republican Party. It will be interesting to watch her try to reach a different demographic. The bench, continued. Tonight, former Secretary of State Condoleezza Rice is taking the stage in a new role when she grabs the podium and perhaps gives us a hint if she wants a future in elected office... or a possible Romney cabinet.

5. Yes, even more energy. We end where we started. The convention seemed tired on Tuesday night. The speakers, even the candidate himself, seemed to want to stay seated. Conventions have a key role in motivating and managing the party activists, and without a shot of adrenaline, the Republicans will have missed one of their best windows to energize their ground game and provide messaging that is repeatable.

You are reading a sneak peek of CNN's Political Gut Check. If you would like to receive it in your Inbox every day, send an email to gutcheck@cnn.com

Leading CNNPolitics: Romney officially clinches nomination at condensed GOP convention
Mitt Romney officially clinched the GOP presidential nomination on Tuesday to move a step closer in his five-year quest for the White House. To roaring cheers at the Republican National Convention in the packed Tampa Bay Times Forum, the delegation from New Jersey put Romney above the 1,144-delegate threshold, ensuring he will be the GOP challenger to President Barack Obama in November. – Tom Cohen

Leading Drudge: Mrs. America
A transcript of Ann Romney’s remarks Tuesday night at the Republican National Convention, as provided by the Republican Party.

Leading HuffPo: What's Love Got To Do With It?
Good cop. Bad cop. The Republican Party showed the nation one of its most winsome faces on the first night of the GOP's shortened three-day convention, giving Ann Romney the first half of prime time. – John Ward

Leading Politico: Mitt Romney: A placeholder for next GOP generation
Ask the rising stars of the GOP about their party’s future and two names repeatedly come up. Neither of them is Mitt Romney. One of them, Ronald Reagan, was born in 1911; the other, Wisconsin Rep. Paul Ryan, in 1970. – Jonathan Martin

Leading The New York Times: Nomination Secure, Romney Pitch Starts
Mitt Romney’s wife, Ann, took the lead in trying to shape perceptions of her husband, hailing him as a strong and steadfast family man whom Americans could trust to help rebuild the economy. – Jeff Zeleny

Who said the existence of beach volley ball “is what freedom is all about” in a speech at the 1996 GOP convention?