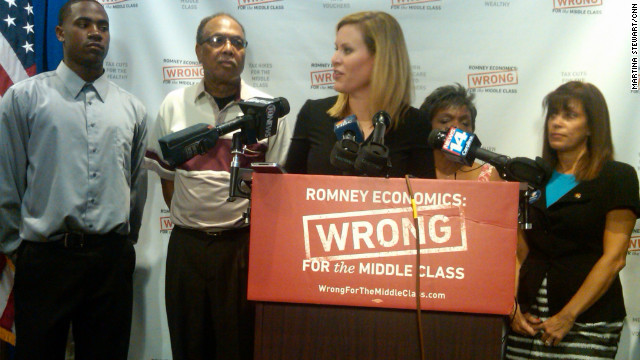 "What it is, is a U-turn," said Rep. Chris Van Hollen, D-Maryland, said Wednesday at news conference, "a hard right, U-turn back to the failed Bush, trickle-down economic policies."

Milwaukee's Democratic Mayor Tom Barrett echoed Van Hollen. "What has happened with this decision – by Mitt Romney to choose Paul Ryan – has crystallized the debate," Barrett said, "And it has allowed Americans to see what the roadmap is for Republicans in this country." Barrett's remark was a clear reference to Ryan budget blueprint which is entitled "A Roadmap for America's Future."

"The roadmap is a U-turn as to what they are claiming to do if they are elected," Barrett added.

In a recent interview, Ryan said he was "excited" for a campaign about the federal budget. In the same interview Ryan also said, "The Romney-Ryan plan for a stronger middle class is about offering solutions to get us back on track, create jobs, balance the budget, get people back to work" and "that Medicare is "absolutely" a winning issue for Republicans, "because we're the ones who are offering a plan to save Medicare, to protect Medicare, to strengthen Medicare."

The Democratic National Committee and the Obama campaign have set up a war room in Tampa this week as Republicans are meeting to nominate Romney and Ryan as their presidential ticket.

Asked about the Democratic counter-convention efforts, Obama Deputy Campaign Manager Stephanie Cutter said Democrats intend to be aggressive as the general election phase of the presidential campaign begins in earnest.

After noting that there are roughly 70 days left until Election Day, Cutter said "we're not going to cede any one of them – and we are going to be aggressive about telling the story of this administration."