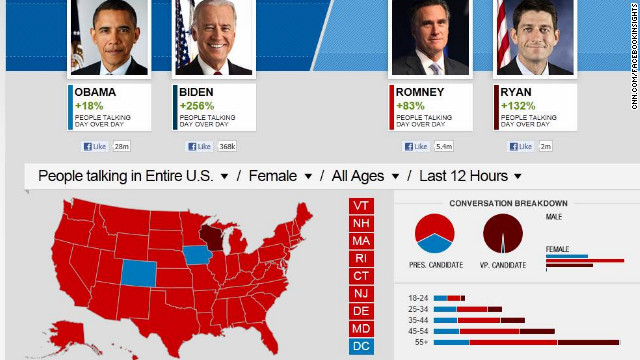 This screengrab from late Tuesday night shows that Mitt Romney is being discussed more than President Obama among women in nearly every state.
August 29th, 2012
11:10 AM ET

(CNN) - After the first full day of the Republican National Convention, Mitt Romney is dominating the political conversation among women on Facebook.

The Facebook CNN Election Insights tool, which measures the number of people on Facebook talking about the candidates, shows women talking about Mitt Romney more than Barack Obama in every state except Colorado and Iowa, the two states where Obama campaigned on Tuesday.

Follow CNN and CNN Politics on Facebook, catch the latest updates from the GOP convention on CNN's 2012 Conventions Live Blog, and check out the CNN Electoral Map and Calculator to game out your own strategy for November.

This is a big difference compared to the past seven days of Facebook activity, where the interactive state heat-map shows more women discussing Obama in all of the Western states, Hawaii, and parts of the Midwest and Northeast.

Among men, Mitt Romney has been talked about more than Obama in every state for the last week.

The conversation also changes depending on the age of the Facebook user. Eighteen to 24 year-olds are buzzing about Barack Obama the most. Among people over age 55, the chatter skews heavily toward Romney.

The timeline on the Facebook-CNN Insights tool shows a giant spike for the president around 9 p.m. ET Tuesday. This coincides with a Facebook post on Obama's fan page at 9:12pm ET of a picture slamming Christie & Romney, which as of this post had more than 50,000 'likes' and more than 14,000 shares.

Ryan has more than five times the number of Facebook fans as Joe Biden, who is the least discussed of the four major candidates. Obama's page is the most popular, with more than 28 million fans. Mitt Romney has 5.4 million fans.

The Facebook-CNN Election Insights measures daily unique mentions, which is the number of people who either include a post or interact with a candidate's fan page at least once a day. This includes both positive and negative posts. More than 160 million Americans are on Facebook.