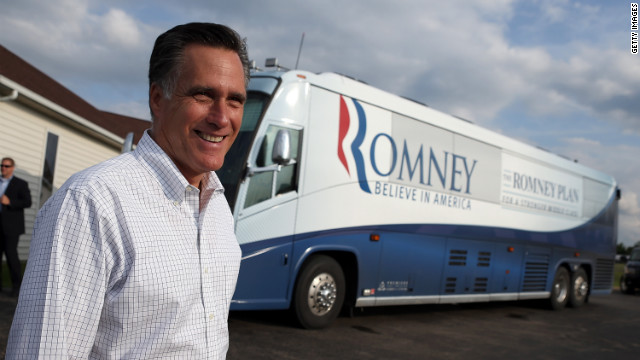 BREAKING: TEXAS VOTER ID LAW STRUCK DOWN… A federal appeals court in Washington has struck down the Texas law that required photo identification for voters at the polls. The decision is a major victory for the Obama administration and its Democratic allies, who had challenged the law. “The court’s decision today and the decision earlier this week on the Texas redistricting plans not only reaffirm – but help protect – the vital role the Voting Rights Act plays in our society to ensure that every American has the right to vote and to have that vote counted,” said Attorney General Eric Holder in a written statement. – Terry Frieden

DIRTY HARRY WILL BE IN THE BUILDING… Legendary actor Clint Eastwood is, in fact, tonight’s surprise speaker at the Republican National Convention. According to reporting by CNN’s Deirdre Walsh, Eastwood will soon do a walk through of the Tampa Bay Times Forum in preparation for his remarks.

TRAIL TRIVIA
(Answer below)
“Extremism in the defense of liberty is no vice. And let me remind you also that moderation in the pursuit of justice is no virtue.” Who said this at the 1964 Republican convention?

Tonight will be about moments …

… that will help shape the rest of Mitt Romney’s life, perhaps Barack Obama’s life and maybe the future direction of the country.

A Romney adviser tells us that the former governor will make his case to the American people in a speech that can be separated into four segments:

In the hours leading up to Romney’s speech, he will turn to friends, family and supporters to help tell his story. There will be members of his church on the stage talking about how he has “helped people get through difficult times” – fully opening the door on his Mormon faith, which is not widely understood. Olympians will also take the stage to express their support for him as will Clint Eastwood – one of the few Republicans from Hollywood.

This evening will also provide Sen. Marco Rubio, R-Florida, with an opportunity to introduce himself to the nation. Rubio, the rising star, could make a run for president himself in 2016 if Romney loses in November.

Tonight we will be watching a moment in history. Come tomorrow, though, our attention will turn north to Charlotte where we will be doing it all over again – except with the Democrats.

Leading CNNPolitics: For Romney, the speech of his life
The challenge for Mitt Romney as he accepts the Republican presidential nomination is to push past the the stiff and reserved perception that's been created for him by opponents and comedians and make a heartfelt and profound appeal to the millions of Americans who will be watching his speech Thursday night. – Halimah Abdullah

Leading Drudge: Another week, another 374,000 jobless claims...
The number of Americans filing new claims for jobless benefits was unchanged last week, pointing to a labor market that was treading water. Initial claims for state unemployment benefits were a seasonally adjusted 374,000, the Labor Department said on Thursday. The prior week's figure was revised up to show 2,000 more applications than previously reported.

Leading HuffPo: Awash In Secret Donations, Republicans Reverse Support For Campaign Finance Disclosure
Outside of the Tampa Bay Times Forum, where the Republican convention is taking place, independent conservative groups huddle in strategy sessions and hold laudatory events for some of their mega-donors, at least those who are willing to disclose their names. But those not willing to be named are the real story. Secret donors and the groups that accept their money have become central to the Republican Party's plan to win the White House and take full control over Congress. – Paul Blumenthal

Leading Politico: Mitt Romney's make-or-break night
Mitt Romney is about to face the most important political moment of his life. The speech Romney delivers at the Republican National Convention’s final night in Tampa will be one of his last opportunities to sketch a portrait of who he is and what he stands for to a country whose battleground states have seen him relentlessly portrayed by the Obama campaign as a heartless corporate raider — a perception that has dented his approval ratings and made it difficult for the GOP to change the campaign narrative. – Maggie Haberman

Leading The New York Times: Republican Women Play Down Social Issues
About a block from the Republican National Convention, in a strip mall next to a Hooters restaurant, is the Woman Up! Pavilion, sponsored by the Young Guns Network, a “super PAC” promoting conservative candidates. What is missing from the all-inclusive spot? Any discussion of the social issues — abortion, same-sex marriage, insurance coverage for birth control — that have at times engulfed the Republican nominating contest. – Susan Saulny

- Democrats hammer Ryan on inaccuracies in prime-time speech -
JIM MESSINA, OBAMA’S CAMPAIGN MANAGER, IN A FUNDRAISING E-MAIL TO SUPPORTERS: “If you've seen any coverage of Paul Ryan's speech in Tampa, you know that the consensus among journalists and independent observers is that it was ... factually challenged. He lied about Medicare. He lied about the Recovery Act. He lied about the deficit and debt. He even dishonestly attacked Barack Obama for the closing of a GM plant in his hometown of Janesville, Wisconsin, a plant that closed in December 2008 under George W. Bush. He also failed to offer one constructive idea about what he would do to move the country forward.”

- Ryan campaign defends speech, says it was ‘factually accurate’ -
BRENDAN BUCK, RYAN SPOKESMAN FOR ROMNEY CAMPAIGN, IN A STATEMENT TO THE PRESS: “Ryan voted against the plan because it didn’t do enough on the big driver of our debt: health care. To that point, he worked on the commission with Democrat Alice Rivlin to put together a comprehensive health entitlement plan. … The statement was factually accurate and gets to a fundamental contrast: We’re proposing meaningful solutions to balance the budget while the president is on the sidelines.”

- Jeb comfortable with Romney’s immigration policy, but ‘tone can be better’ -
FORMER FLORIDA GOV. JEB BUSH IN AN INTERVIEW WITH CNN: “I think the tone can be better. I'm more interested in what president to be Mitt Romney’s views are, and I am comfortable with those views. I think he will be a president that will try to solve our immigration problem by securing the border, but then turning this conversation into how can we create sustained economic growth by using a catalytic converter for growth in the pursuit of dreams, and that's an immigration policy that allows people to come in legally and be able to add value and vitality to our country.”

- Obama complimentary on Romney’s ‘walk the walk’ faith -
PRESIDENT BARACK OBAMA IN AN INTERVIEW WITH TIME’S MICHAEL SCHERER: “He strikes me as somebody who is very disciplined. And I think that that is a quality that obviously contributed to his success as a private equity guy. I think he takes his faith very seriously. And as somebody who takes my Christian faith seriously, I appreciate that he seems to walk the walk and not just be talking the talk when it comes to his participation in his church.”

Some have called Sen. Barry Goldwater of Arizona the ideological father of the current Republican Party and at the 1964 Republican National Convention in San Francisco, the Republicans’ nominee for president outlined his views on conservative principles.

“Extremism in the defense of liberty is no vice,” he said. “And let me remind you also that moderation in the pursuit of justice is no virtue.”

The line was a hit: The packed Cow Palace arena in San Francisco went crazy, the crowd maintaining their applause for so long that Goldwater was forced to stop his speech, thank the crowd for the ovation and raise his hands like a victorious warrior. Though many reporters and pundits expected Goldwater to temper his far-right conservative views in his run for the presidency, this speech made it clear that the senator was going to do nothing of the sort.

And while Goldwater would end up getting trounced by President Lyndon B. Johnson in the ’64 presidential election (the Republicans won only Arizona – Goldwater’s home state – and the Deep South), it was statements like this that earned him the nickname “Mr. Conservative.”

The 1964 run was a turning point moment for the Republican Party as it was the party’s first strong showing in the Deep South since Reconstruction. Need proof? While Goldwater won Mississippi with 87% of the vote in 1964, he still failed to reach the massive 98% mark that Democrat Franklin D. Roosevelt hit in 1936.

She may have been second place yesterday, but LeticiainDC (@LeticiainDC) shoots and scores today. A close second goes to Greg Dean (@gregdean11), Puck Buddys (@PuckBuddys) and sfpelosi (@sfpelosi). Congrats to all!

P.S. – While we are glad that Gut Check favorite Abby Livingston (@RollCallAbby) decided to play Gut Check Trivia, we regret to inform her that the answer was not Ronald Reagan.

WHAT TO WATCH TONIGHT:

24/7 SOCIAL WATCH #CNNGrill:
– Check out our Facebook-CNN Election Insights tool, during the speeches to chart the spikes in political discussion on Facebook - including states, age and gender breakdown. You can find more dynamic, real-time charts and visualizations at CNN.com/electioninsights.