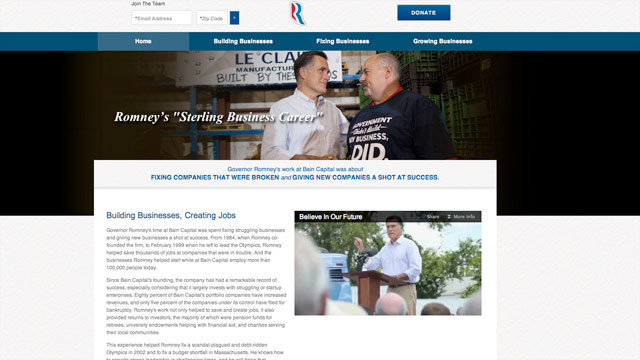 The website, www.sterlingbusinesscareer.com, was debuted just hours before Romney is set to take the stage at the Republican National Convention and accept his party's nomination for president.

While the candidate frequently touts his business experience as a calling card on the campaign trail, he rarely brings up his former private equity firm, Bain Capital, by name or talks at length about his role at the company. He does, however, frequently mention Bain's success stories, including helping form Staples and Dominos.

Campaign officials have said Romney will talk about his corporate career in his highly-anticipated speech Thursday, which follows a program focused on a biographical theme.

The new website offers testimonials from former colleagues and features profiles on businesses that Bain helped "grow" or "fix." It also has a section for businesses Romney helped "build," which specifically highlights Staples and Steel Dynamics. Each business has its own section on the site, complete with text and video describing Bain's involvement with the company.

The title of the website comes from a quote from former President Bill Clinton, who took heat from fellow Democrats when he said Romney had a "sterling business career" in a May interview with CNN's Piers Morgan.

President Barack Obama's re-election team and allies have made Romney's corporate history a major target in their campaign. Seeking to define Romney shortly after he became the all-but-certain GOP nominee in April, Team Obama quickly pounced on the candidate's private equity past, releasing ad after ad that painted the candidate as a greedy businessman.

Democrats especially railed the former Massachusetts governor over some of the firms that ultimately went bankrupt after Bain loaded them up with debt as part of a leveraged buyout. A pro-Obama super PAC, Priorities USA Action, spent $20 million this summer on television ads that featured laid off workers from these shuttered business.

Romney repeatedly responded to the attacks, saying he does not apologize for his success and criticized Obama's campaign for trying to distract voters from his administration's "failed" economic policies. Bain Capital, for its part, responded to the ads by pointing to its successes, saying 80% of their 350 companies and 100 start-up investments grew as a result of Bain investments.

The new "sterling" website also cites a similar statistic, adding "only five percent of the companies under its control have filed for bankruptcy."