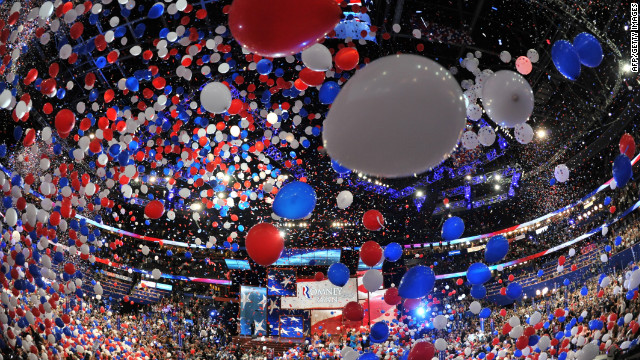 MITT ROMNEY TOURS LAFITTE, LOUISIANA WITH STATE’S GOVERNOR AND U.S. SENATOR: Republican presidential nominee Mitt Romney arrived in Louisiana Friday afternoon to tour damage left in the wake of Hurricane Isaac with Gov. Bobby Jindal and Sen. David Vitter. Romney, who was accompanied by his wife, Ann, said that the trip was to “learn and obviously to draw some attention to what's going [on] here... so that people around the country know that people done here need help." – Gregory Wallace

PRESIDENT BARACK OBAMA AT A SPEECH IN FORT BLISS, TEXAS: “Let me say that our hearts are obviously with all the folks who are down in Louisiana and the Gulf Coast who are dealing with aftermath of Hurricane Isaac. Our prayers are with those who lost loved ones and I have directed the federal government to do everything that it can to help our partners at the state and local level. As a country, we stand united with our fellow Americans in their hour of need.”

TRAIL TRIVIA
(Answer below)
In 2008, candidate Barack Obama won the Democratic nomination “by acclimation,” a process that forgoes the state-by-state reading process and nominates a candidate by voice vote. Before that, when was the last time the Democrats have nominated a presidential candidate by acclimation?

Not since Rob Lowe danced with Snow White at the Academy Awards has a celebrity behaving oddly so captivated water-cooler discussion and overshadowed an event internationally known for pomp instead of circumstance.

The Eastwood ad lib, received with laughter by the convention crowd, was befuddling on television and went viral in social media, disproving the notion that conventions are all scripted stagecraft and magnifying the headache that social media causes campaigns as a ridiculously trivial but deliciously entertaining gaffe overshadowed a much more important message.

This all serves as the perfect drum roll for our Gut Check and Google discussion on the uncontainable power of social media. We teamed up with Klout (klout.com) for the conventions to rank the top list of political journalists and strategists in social media. [Note: To avoid bias, we took out CNN employees, though many of our colleagues deserve props for leading the way in using social media to engage and inform.] Klout uses a metric of social indicators to come up with the score, which changes daily. If you are surprised or angry with the list, update your Facebook timeline, get your tweets in Gut Check and expand your Linked In database, and perhaps you could raise your Klout score (which is on a scale of 1-100).

The Top 5 Republican Consultants in Social Media, Ranked by Klout

Watch Richard Grenell join your Political Gut Check co-authors in a discussion about this, as well as the tool and curse of social media in politics.

The Top 5 Political Journalists in Social Media, Ranked by Klout

GUT CHECK DVR: “Obama Revealed: The Man, The President” will air from 8 to 9:30 p.m. ET and PT Monday, the night before the Democratic National Convention begins in Charlotte, North Carolina, and includes fascinating new interviews with President Obama and many of his closest advisers - including Secretary of State Hillary Clinton.

Leading CNNPolitics: Ryan doesn't back down on controversial comments from speech
Despite facing heated criticism over some comments from his convention speech, GOP vice presidential nominee Paul Ryan stood by his remarks Thursday. – Ashley Killough

Leading Drudge: Blink: Obama To New Orleans
President Obama will visit Louisiana after all. Obama campaign spokeswoman Jennifer Psaki told POLITICO earlier Friday that the president had no plans yet to visit the Gulf state and review damage from Hurricane Isaac, even though Mitt Romney announced plans to visit Friday. – Donovan Slack

Leading Politico: No silver tongue, but Mitt Romney gets job done
Mitt Romney’s acceptance speech won’t find its way into any future pantheon of memorable convention addresses, but the Republican accepted his party’s nomination with remarks that will help him with swing voters in two important ways. – Jonathan Martin

Leading The New York Times: After a Gunslinger Cuts Loose, Romney Aides Take Cover
Clint Eastwood’s rambling and off-color endorsement of Mitt Romney on Thursday seemed to startle and unsettle even the candidate’s own top aides, several of whom made a point of distancing themselves from the decision to put him onstage without a polished script. – Michael Barbaro and Jeremy Peters

Leading Bloomberg: Exclusive: Inside Karl Rove's Billionaire Fundraiser
On the final morning of the Republican National Convention, Karl Rove took the stage at the Tampa Club to provide an exclusive breakfast briefing to about 70 of the Republican party’s highest-earning and most powerful donors…. He also detailed plans for Senate and House races, and joked, “We should sink Todd Akin. If he’s found mysteriously murdered, don’t look for my whereabouts!” Then Rove pleaded with his audience for more money—much more. – Sheelah Kolhatkar

Gut Check Full Service: Steve Taylor, District Director for Congressman Akin, responded to the Bloomberg report in a statement to CNN: “Given the current FBI investigation of threats against Congressman Akin and call for acts of violence and rape against his family and staff joking as to the potential murder of congressman Akin is deeply disturbing. I am certain he misspoke.”

- Ann: There's a juvenile in the White House? -
ANN ROMNEY IN AN INTERVIEW WITH CNN’S CANDY CROWLEY: “I’m hearing from so many women that may not have considered voting for a Republican before that said it’s time for the grownup to come - the man that’s going to take this very seriously. And take the future of our children very, very seriously. I very much believe it’s going to be an economic election. And I think a lot of women may be voting this cycle around in a different way than they usually are. And that is thinking about the economy. Thinking about their own jobs, their husbands’ jobs, but also thinking about the future.”

- Not mincing words: DWS calls welfare attacks racist -
DEMOCRATIC NATIONAL COMMITTEE CHAIRWOMAN DEBBIE WASSERMAN SCHULTZ AT A BREAKFAST WITH U.S. NEWS REPORTERS THURSDAY MORNING: “Are there a lot of people that say, 'You know what, the number one issue that I want to hear about from either presidential candidate is about his policy on welfare reform'? I mean, why else — it's so shockingly transparent — why else would Mitt Romney make a supposedly casual joke about the president's place of birth, you know, juxtaposed against his own place of birth? Why else would he spend millions of dollars of Mitt Romney campaign money talking about — putting out a lie, and then repeating it over and over and over when there isn't a single fact checking organization that has said that it's accurate, that it has any accuracy — in fact, it's the opposite — except to be a dog whistle for voters who consider race when casting their ballot?”

- Alex Castellanos: Who won and who lost in Tampa -
ALEX CASTELLANOS IN AN OPINION PIECE ON CNN: “Ann Romney added dimension to Mitt Romney. We see more in him now, through her eyes, if not our own. Paul Ryan passed the first and most important test of a VP nominee, 'Do no harm.' Ryan did not say he could see the deficit from his porch. … Rand Paul's speech was chloroform via teleprompter. He lacks his father's wit and humor. The next lap of Paulites are in big trouble. … Marco Rubio is 'The Natural.' The most important part of his wonderful speech was its generosity. He toned his speech down to serve his primary purpose. Rubio set up the man he was nominating, Romney.”

- Reid charges Romney-Ryan would leave disaster victims stranded -
SENATE MAJORITY LEADER HARRY REID IN A STATEMENT TO THE PRESS: “It is the height of hypocrisy for Mitt Romney and Paul Ryan to make a pretense of showing sympathy for the victims of Hurricane Isaac when their policies would leave those affected by this disaster stranded and on their own.”

Sarah Huisenga (@SarahH_CBSNJ)
Romney has now said "hold us accountable" 3 times...urging people to look at what Obama promised and if he came through.

Matt K. Lewis (@mattklewis)
Once Rove publicly declares that Akin can't win, he sort of has a vested interest in making sure Akin doesn't prove him wrong.

McKay Coppins (‏@mckaycoppins)
Romney says he was "embarrassed" at times by the nice things people said about him at the convention. Says they were "overly generous."

Chris Rock (@chrisrockoz)
Clint Eastwood on the phone with Obama now: "It all went according to plan, sir." #RNC #GOP2012

Laura Ingraham (@IngrahamAngle)
Did Clint Eastwood make it more acceptable for Hollywood to make fun of the president?

Bob Newhart (@BobNewhart)
I heard that Clint Eastwood was channeling me at the RNC. My lawyers and I are drafting our lawsuit... #RNC #ClintEastwood #rnc2012 #GOP2012

Will McAvoy (@WillMcAvoyACN)
Last night Clint Eastwood angrily attacked an imaginary version of President Obama. It was business as usual for the Republican Party.

jmartpolitico (@jmartpolitico)
T Brokaw, who has convos since '68, on Eastwood: “Bill Clinton introducing...Dukakis just went to a distant 2nd place as a bizarre moment"

Seth Meyers (@sethmeyers21)
That was so awesome. Biden has to go shirtless for DNC to top it

“With eyes firmly fixed on the future, in the spirit of unity, with the goal of victory, with faith in our party and our country, let’s declare together, in one voice, right here, right now, that Barack Obama is our candidate and he will be our president,” Clinton proclaimed.

With the nomination by acclamation called, then-Speaker of the House Nancy Pelosi made it official.

Before 2008, the most recent use was in 1964 for Lyndon B. Johnson. Before that, Franklin Roosevelt was nominated using voice vote in 1936, and Woodrow Wilson was nominated the same way in 1916.

After a week that saw a deluge of correct trivia answers, this question was clearly too difficult for our Gut Check loyalists. Too much fun on the last night in Tampa? On a plane to Charlotte?