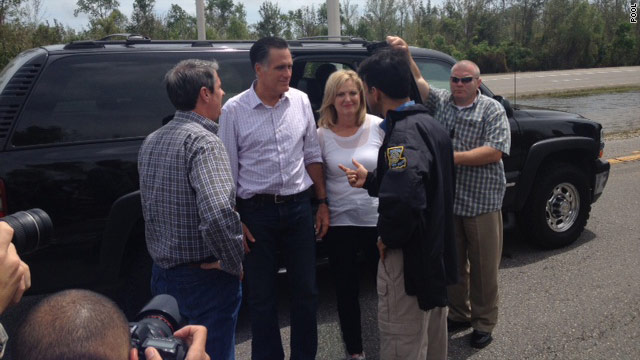 Romney, who was accompanied by his wife, Ann, said that the trip was to learn and obviously to draw some attention to what's going [on] here... so that people around the country know that people done here need help."

Romney met Jindal and Vitter in Jefferson Parish, where where flooding and downed trees was visible on the roadside. National Guard troops, with vehicles that can accomodate high water, were in the area.

Reporters could hear Romney and Jindal discussing the fishing industry, which is a major part of the economy in this area.

He also stopped to shake hands with a man along a flooded roadway with a sign which said, "Mitt's Our Man."

Some 630,000 people were without power Friday afternoon in Arkansas, Alabama, Mississippi, and Louisiana, where at least 572,000 people were in the dark. Jindal said that many people who should have evacuated the area he and Romney visited had not evacuated.

The top Democrat in the Senate, Majority Leader Harry Reid, issued a harsh statement Friday while Romney was in Louisiana, saying that "Under a Romney-Ryan administration, we would not have been prepared to respond to Hurricane Isaac."

"Paul Ryan's budget would gut disaster funding, making it much harder to get aid to our fellow Americans in their time of need," he continued, mentioning Romney's running mate, House Budget Committee Chairman Paul Ryan. "It is the height of hypocrisy for Mitt Romney and Paul Ryan to make a pretense of showing sympathy for the victims of Hurricane Isaac when their policies would leave those affected by this disaster stranded and on their own."