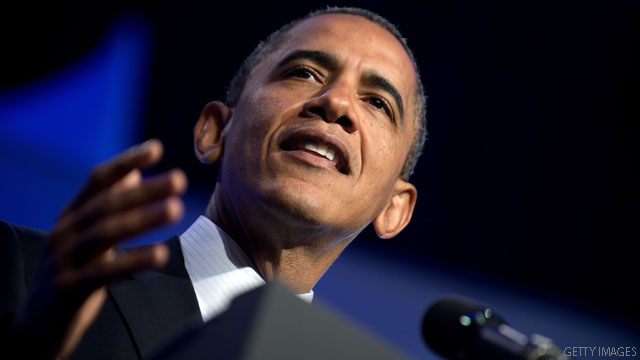 "There's a reason for me to begin the journey here in Iowa, where it first began more than four years ago," Obama said, reminding Iowans that it was a victory at the state's caucuses in 2008 that set him on his path to the presidency. "And it will be you, Iowa, who choose the path we take from here."

Beginning what will surely be several days spent rebutting the messages of last week's Republican National Convention in Tampa, Florida, the president took his opponent to task for offering "rerun" policies "better suited for the last century."

"If you didn't DVR it, let me recap it for you," Obama said of the Republican's convention. "Everything's bad. It's Obama's fault, and Governor Romney is the only one who knows the secret to creating jobs and growing the economy. That was the pitch. There was a lot of talk about hard truths and bold choices, but nobody ever actually bothered to tell you what they were."

"This Thursday night I'll offer you what I believe is a better path forward," Obama said. "A path that grows this economy, creates more good jobs, strengthens the middle class, and the good news is you get to choose which path we take."

Obama campaign press secretary Jen Psaki told reporters that the president was working on the speech aboard the morning flight to Iowa.

For the first time on the stump, the president also picked up a line of attack that his campaign began shortly after GOP nominee Mitt Romney finished his acceptance speech late Thursday night.

"This November you get to decide the future of this war in Afghanistan," Obama told the crowd. "Governor Romney had nothing to say about Afghanistan last week, let alone offer a plan for the 33,000 troops who will have come home from the war by the end of this month."

The Obama campaign pointed out this omission from Romney's speech in a statement released just hours after Romney left the stage in Tampa, and continued the attack in e-mails and a web video released Friday morning. Some conservative writers also criticized the GOP nominee for not mentioning U.S. troops fighting abroad in his acceptance speech Thursday night.

In a move reminiscent of the president's rock star status as an upstart candidate in 2008, Saturday's campaign event also featured performances by indie rock band The National and former Soundgarden and Audioslave frontman Chris Cornell before the president arrived.

Responding to the president's speech, Romney spokesman Ryan Williams said that Obama may have "dubbed this trip the 'Road to Charlotte' but his policies have taken us on a road to declining incomes, higher unemployment and more uncertainty for the middle class."