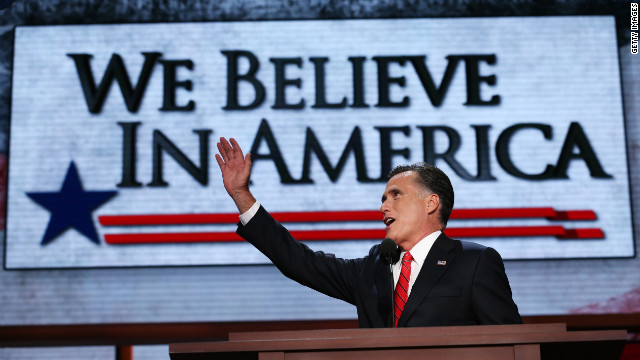 RNC social sharing was more significant in Washington, D.C., than in any other state, although Florida, which hosted the convention, placed second in a list of buzz by geography. The data provided by Facebook did not specify the timeframe for this buzz, but the Republican convention opened on Monday and concluded with Romney's acceptance speech on Thursday evening.

While the data compiled by Facebook, shared through a partnership with CNN, is not a scientific survey, it is an attempt to gauge how users of the website, and the larger population, perceive the state of political play.

A demographic breakdown of the data provided by the social sharing website found that men over the age of 65 were talking about Clint Eastwood's surprise appearance at the RNC more than any other group. Next came men between 55 and 64, followed by women over the age of 65. The data did not, however, indicate what the Facebook users thought of his controversial remarks, nor did it measure what demographic groups were watching coverage of the convention in greater numbers than other groups.

The "Talk Meter" calculates a jump in buzz, so Eastwood being outside of the spotlight prior to his remarks helped him jump up the "Talk Meter" scale.

Geographically, the state with the largest number of people discussing their performances was Utah. That state has a high percentage of people who share Romney's Mormon faith.

The data showed that men between 35 and 54 talked about Romney's running mate, Rep. Paul Ryan, more than any other demographic. He was buzzed about the most in Washington, D.C., and Wisconsin, his home state.

Romney's campaign may find encouragement in the geographic areas which the RNC received the greatest rate of buzz. Besides battleground Florida, the toss-up states of Colorado, North Carolina, and Nevada also placed in the top ten, according to this scale.

The Facebook "Talk Meter" also assigns a numerical value to an event's magnitude. The RNC ranked at approximately a 6.12, Facebook said - which placed it above Hurricane Isaac (at a 5.5) and the announcement of Ryan as Romney's running mate (5.21). But it was no Super Bowl (8.62 in 2012) nor Supreme Court health care decision (6.97 earlier this year), nor did it compete with the inauguration of President Barack Obama (8.99) in 2008.