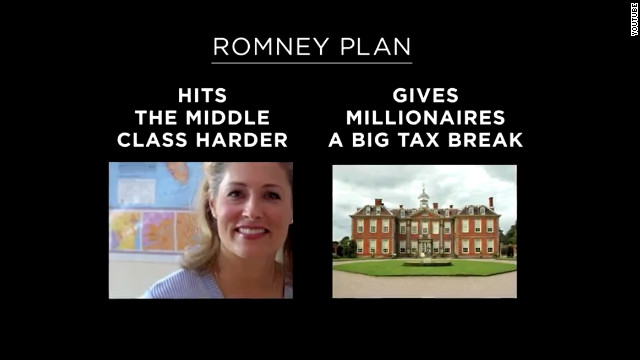 (CNN) – The latest ad from President Barack Obama's re-election team hits his rival Mitt Romney on his tax plan, which the spot characterizes as unfair to the middle class.

"Heavy Load," which the campaign said would air in Colorado, Iowa, New Hampshire, Nevada, Ohio, Virginia, and Florida, uses analysis from the Tax Policy Center. The Romney campaign has quibbled with that study, which it says does not take into account the full scope of the plan offered by the Republican nominee.

In Monday's Obama ad, a narrator begins, "The middle class is carrying a heavy load in America, but Mitt Romney doesn't see it."

He continues, "Under the Romney plan, a middle class family will pay an average of up to $2,000 more a year in taxes, while at the same time giving multi-millionaires like himself a $250,000 tax cut."

The Tax Policy Center report, released at the beginning of August, determined that Romney's plans would provide large tax cuts to the wealthiest Americans, while increasing the tax burden on the lower and middle classes.

Those tax cuts would lead to a sharp decline in government revenue. Romney insists he will make up the difference in-part by limiting deductions, exemptions and credits currently available to top-level income earners, though won't say which tax breaks he plans to eliminate.

The Tax Policy Center report indicates the plan would force the tax burden to shift toward lower and middle-class Americans.

"A revenue-neutral individual income tax change that incorporates the features Governor Romney has proposed ... would provide large tax cuts to high-income households, and increase the tax burdens on middle- and/or lower-income taxpayers," the report concludes.

The Romney campaign disputed the findings of the study when it was released, arguing that the analysis was flawed because it did not account for additional revenue that would result from a reduction in the corporate tax rate - another part of Romney's plan.

In the Obama spot released Monday, the narrator arrives at a grim conclusion, saying that "Romney hits the middle class harder and gives millionaires an even bigger break. Is that the way forward for America?"

"There’s only one candidate for president who will raise taxes on middle-class families – and that’s President Obama," Romney spokeswoman Amanda Henneberg wrote in response to the ad. "For four years, his policies have crushed the middle class with high unemployment and declining incomes. Now his tax increase plan will stifle growth and lead to fewer jobs. Mitt Romney’s plan will lower rates across the board, helping create jobs and higher take-home pay."