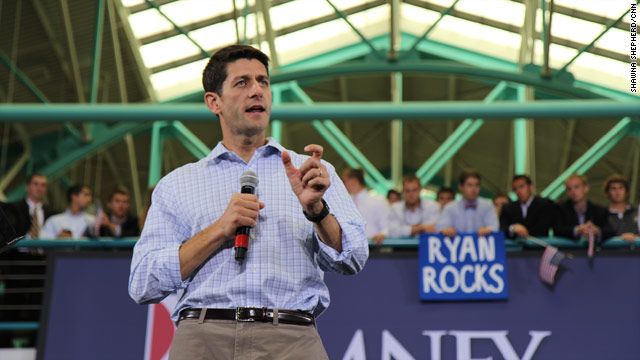 "You see the president has no record to run on. In fact, every president since the Great Depression who asked Americans to send them into a second term could say that you are better off today than you were four years ago, except for Jimmy Carter and for President Barack Obama," said Ryan.

The 1980 presidential race was largely defined by that question after Republican Ronald Reagan posed it rhetorically at the end of his only debate with Democratic incumbent Carter.

Republican running mates Mitt Romney and Ryan are hammering that same message after prominent Democratic surrogates couldn't give a definitive "yes" to the question in various television appearances over the weekend. On Monday Democrats seemed more certain, though still attempted to balance touting improving economic data with the tough realities that many Americans still face.

The seven-term Wisconsin congressman delivered the GOP's counterattack at a rally before thousands of people at East Carolina University, located nearly 250 miles from Charlotte where the Democratic National Convention is being held.

"In 1980, under Jimmy Carter, 330,000 businesses filed for bankruptcy. Last year, under President Obama's failed leadership, 1.4 million businesses filed for bankruptcy," Paul said. "Take a look at people who are having a hard time making their mortgage payments, 77,000 delinquent mortgages by the time Jimmy Carter left office. Under President Obama 3 million."

He continued, "So when you take a look at what we are going to hear in Charlotte today, the president can say a lot of things and he will, but he can't tell you that you are better off. Simply put, the Jimmy Carter years look like the good old days compared to where we are right now."

Obama's re-election team defended the president's record and said their GOP challenger was "waxing nostalgic about how things were three decades ago" with the comparisons to Carter.

"The truth is that under the President's leadership, we've gone from losing 800,000 jobs a month to adding 4.5 million jobs over the last 29 months of private sector job growth," Obama campaign spokesman Danny Kanner said in a statement.

Republicans have long sought to portray Obama as unqualified to the challenge of fixing America's ailing economy, and much of last week's Republican National Convention was spent attacking Obama's record on jobs creation.

Romney's campaign said the theme would continue through the week, leading up to Obama's acceptance of the Democratic presidential nomination on Thursday.

A new poll indicates Romney has a slight advantage in North Carolina. Obama narrowly won the battleground state four years ago. He was the first Democrat to carry the Tar Heel state in a presidential election since 1976.

"Your country needs your help. Eastern North Carolina is so crucial and important to this," Ryan told hundreds in one of two overflow crowds on Monday. "This election is one of the most defining election of our lifetimes, no matter what generation you come from."